When the time came for my boyfriend Vince and I to bring a dog into our lives, we researched breeds for a few months and had some different types in mind.

At the time, we knew we wanted to adopt from a shelter but didn’t really understand how dire the situation is for pit bulls in a large city like Philadelphia. So few people are willing to adopt a pit bull/pit mix because of their unfortunate bad rap (which couldn’t be farther from the truth, but I digress). 99% of the dogs I was finding on Petfinder were pit bulls. I did some research and learned what a loving, playful and devoted breed they are. Their stories and sweet faces made us realize that it didn’t matter what kind of dog we adopted; any dog would bring us the companionship we were looking for. 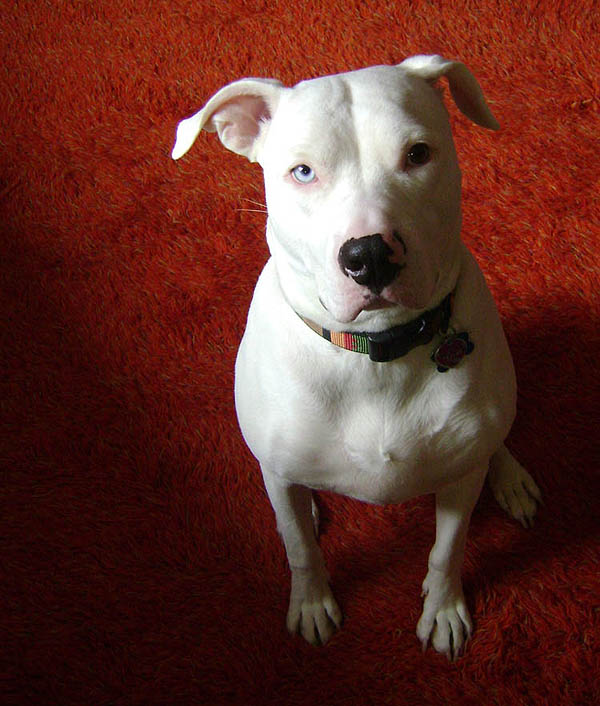 I browsed through hundreds of profiles, each dog more deserving of a loving home than the last. How would we ever decide? As I scrolled through the thumbnail images, the most striking dog I’ve ever seen caught my eye. My heart stopped and I knew I had found our dog. It was Otis, a 16-month-old pit bull/Dogo Argentino (we think?) mix. His profile said he was a good, sweet boy who liked to play, and that he had been born deaf. To be honest, I had never really thought about dogs being deaf! This only made me want to help him even more. I called PAWS immediately and set up an appointment for Vince and I to meet him later that week.

As soon as we laid eyes on him, we knew he was coming home with us. The shelter volunteers told us that he was one of their favorite dogs, despite the fact that this was his third stay in the shelter (bad news for any dog). He was brought there as a puppy, then adopted and returned twice for bad behavior. We figured that no one had had the patience to train a dog with special needs. We spent some time playing with him, filled out the foster paperwork (as if it wouldn’t become a permanent adoption!) and took him home.

Because of Otis’ deafness, he took a little longer to catch on to training since we are unable to use voice commands and only used positive reinforcement. We have taught him several hand signals, adapted from American sign language, which he learned with the help of lots of treats. Once he started to catch on, his eyes gleamed with pride and he grew more and more confident. I think what he needed all along was someone to adapt to his way of learning. Deafness is more common in dogs than people realize (it is common in Boxers, Dalmatians, Great Danes, Dogo Argentinos and other breeds), but we don’t see it as a handicap. Other than not being able to run off-leash in open areas or hear his name called, he isn’t that different from other dogs. Sometimes we even forget that he is deaf. With a little patience, we have adapted to his needs in ways like tapping on the floor to get his attention and using gestures to communicate. In every other way he is a normal, healthy and happy dog.

We have had Otis almost four years now. Three years ago, I became very ill and was diagnosed with Crohn’s disease. I have had eleven major surgeries, each requiring months of rehabilitation. Throughout this immeasurable physical and emotional trauma, Otis has been my constant and devoted companion. Whenever I come home from the hospital, he sits with me and doesn’t leave my side except to go outside or eat his dinner. He can sense my pain and comforts me as best he can, even licking away tears from my face. His happy demeanor and silly antics made me smile during my darkest days, and I truly believe he got me through it.

As I write this, Otis is sleeping peacefully with his head resting on my arm. Not only does he bring us constant laughter, comfort and joy, but he has changed us for the better. We are kinder, more patient, more compassionate and less materialistic people. All he asks for in return is food, water and shelter. I cannot express how profoundly adopting a dog can open your heart to love, when all it takes is the small gesture of opening your home. We didn’t save Otis’ life; he saved ours.