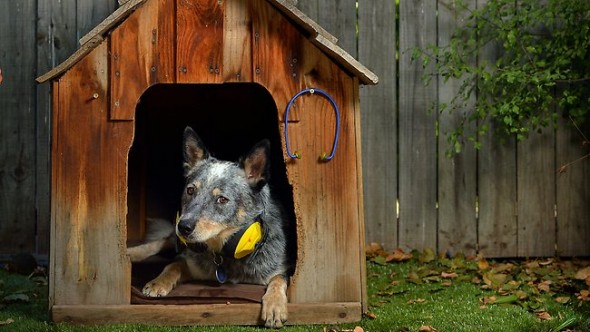 When Yolanda Evagelistis and Luke O’Toole adopted Bruce, a blue-heeler cross, they had no idea that he was deaf. Now Bruce is being trained to interpret hand signals and has become a very well behaved puppy.

Bruce was adopted by Evagelistis and O’Toole in November from The Lost Dogs’ Home in Australia. His previous owner never disclosed that he was deaf and Evagelistis and O’Toole had no idea he couldn’t hear when they first took him home. They soon suspected something was off with Bruce and brought him back to the Lost Dog’s Home to be checked out. That’s when they learned he was deaf.

“We just fell in love with him and his friendly nature,” said Evagelistis. “I can’t believe how happy he makes us.” To help with his inability to hear Bruce has been training to learn hand signals, make eye contact and obey commands. Every Saturday he goes to doggy school and every day Evagelistis and O’Toole work with him to learn the various hand signals. Bruce has learned hand signals that tell him to come, sit, stop, drop to the ground and go for a walk. “He is doing well and his trainers have said he is the best dog in his puppy class.”