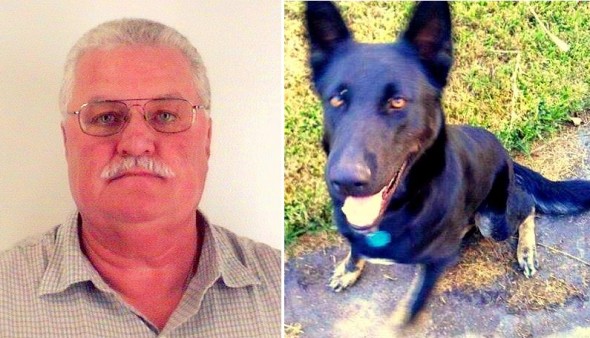 FORT WORTH — A Fort Worth police deputy chief who fatally shot a German shepherd after the dog reportedly mauled his cat to death was arrested Monday on a warrant accusing him of cruelty to an animal.

Deputy Chief Kenneth Flynn, who was off duty when he shot the dog named Bentley, surrendered at the Tarrant County Jail Monday night and was immediately released on a $1,000 bond.

A woman present during the dog’s shooting said she’s upset that Fort Worth officers who initially responded to her 911 call didn’t make a police report.

The woman, who asked not to be identified for fear of retaliation, said the investigation into the deputy chief’s conduct did not begin until after she called back three hours after the shooting and asked dispatchers for a report number, only to learn that the officers had not made one.

“I want to understand why they didn’t file that report,” the woman said in a recent interview with the Star-Telegram. “Were they intimidated by this man’s rank?”

The shooting occurred on the evening of Sept. 29 in the 1300 block of Oak Grove Road East, not far from Flynn’s home.

Monday night, Robert Rogers, Flynn’s attorney, said: “Deputy Chief Flynn has protected and served this community for over 30 years. His actions against a dangerous dog that had just mauled his pet cat were completely legal in Texas. This arrest reeks of politics, not a well thought out application of Texas law.”

But Bentley’s owner, who asked to be identified only by his first name, Bryan, said Monday night that Bentley was a two-year-old who was never aggressive to humans. He said Bentley and his nine-year-old pit bull, B.B., escaped from his enclosed back yard after a roommate let them out Monday morning, not realizing that the gate had accidentally been left unlatched.

“He was not vicious or dangerous. He was a puppy,” Bryan said. “He would be more likely to run up and lick you and run away than do anything else. He was just a big teddy bear.”

Fort Worth police officials confirmed last week that Flynn, who has been with the department since 1984, had been stripped of his gun and badge and placed on desk duty while under investigation for shooting the dog.

On Monday, Cpl. Tracey Knight, a police spokeswomen, said Flynn, 61, has now been placed on “detached duty,” meaning he is also not allowed to go into the office and must check in daily with a supervising assistant chief.

Police officials would not comment Monday on whether the three officers are also under investigation for not initially filing a police report on the shooting, nor would the officials release the officers’ identities.

“This continues to be an open investigation,” Knight said. “All aspects of this incident will be thoroughly investigated by Internal Affairs detectives.”

Cruelty to an animal is a state-jail felony punishable by up to two years in a state jail and a $10,000 fine.

The woman said she was driving home from work shortly before 6 p.m. Sept. 29 when she noticed a brown and white pit bull roaming on the south side of Oak Grove East.

The woman said she turned around her car, stopped and put her flashers on, to see if she could coax the pit bull toward her.

By that time, a black SUV with a side spotlight pulled into a nearby driveway and the driver got out.

She said the man started waving her off.

“I don’t know who this guy is,” she said. “He said, ‘I’m going to shoot the dog. He killed my cat,’ ” she recalled. “I realized all of a sudden that he’s talking about the dog that is closer to him … a black German shepherd.”

The woman said the man then pulled out a gun, which scared her, but also prompted her to try to talk him out of his plan.

“Look, sir, I have dogs and cats. I know it’s horrible thing to go through. I would be upset too,” she said, retelling her conversation.

She said the man got back inside his SUV, called her a “stupid” or “dumb b—-,” then backed up to drive away.

The woman, who had turned back to the pit bull, heard four or five gunshots.

“He was down the road about three-tenths of a mile when he fired the shots,” she said. “There were no other vehicles around.”

The woman said she called 911, describing the fleeing SUV and the man with a gun to dispatchers. She then drove to the house closest to where the SUV had stopped, where she talked to another woman who had witnessed the shooting.

The witness told her the German shepherd had run off but believed it had been hit “because it yelped.”

“You’re not supposed to shoot an animal unless it’s on your property and it’s endangering you or your animal,” the woman said. “He was hunting [this dog] down. They were not on his property. He was not being rational.”

The woman said three Fort Worth officers and a Tarrant County sheriff’s deputy responded to her 911 call, interviewed both women, then took off in search of the black SUV.

The deputy returned a few minutes later to tell the women that Fort Worth police would be handling the case because they had jurisdiction, she said.

“He said the officers has made contact with the man. He works for Fort Worth PD … He said the dog killed his cat and he did nothing wrong,” the woman said. “I said, ‘He fired shots, sir. This is the city limits. He was not on his property.’ ”

About 9 p.m., concerned that she had not heard from any Fort Worth officers, the woman said she called 911 again and asked dispatchers for the report number in regard to the shooting.

Dispatchers located her earlier call to 911 but told the woman that no police report had been made.

Surprised that no report had been made, the woman said she expressed her concerns to a dispatch supervisor.

By midnight, a Fort Worth lieutenant had left a message on the woman’s cellphone, asking for her to return the call. They talked about 4 a.m. and later that morning, investigators came to the woman’s house, interviewing her and asking her to pick the shooter out of photo line-up.

“If I had not followed up, none of this would have happened,” the woman said.

Bryan, a college student, said he immediately began searching for his dogs after returning home Monday afternoon and finding them missing.

“I went to six different dog pounds and animal control locations looking for them but they weren’t there,” Bryan said. “I looked all through Fort Worth, Crowley and Burleson.”

The woman said she later learned that the German shepherd was found dead in the area the day after the shooting, and its body was picked up by animal control. She said she kept the pit bull at her house, posting signs in the neighborhood in an attempt to find her owner.

On Wednesday, she got a phone call from Bryan.

“I was actually on my way out the door to search some more when one my roommates had called and said that he saw a sign that said ‘found brown and white pit bull,’ ” Bryan said. “I called the number.”

The woman informed him that the pit bull was safe at her house. She said she then delivered the bad news about his German shepherd.

“I said, I am sorry to tell you, but he’s been shot dead by an off-duty officer,” she said.

Bryan said Bentley had killed only small possums in the past.

“The neighborhood kids used to ride him around like a pony,” Bryan said. “I’ve never seen him growl or bare his teeth at anything.”

He said he doesn’t know whether Bentley attacked and killed Flynn’s cat.

“If the dog was in his yard and actually killed his cat, then maybe he would have had the right to shoot it,” Bryan said.

“But the fact that he chased him down in his truck and shot him and drove away and didn’t report it, that makes it a completely different thing.”