Deuce is a hero today, after he risked his life chasing 2 criminals through a Florida swamp.  Through the darkness he relentless pursued his targets and when he caught them, he latched on and did not let go until back up arrived.  The suspects were armed and hiding underwater, so Deuce was at risk but fortunately he came out unharmed.

Deputy Charles Perdomo,  Deuce’s handler in the K-9 division of the Hillsborough County Sheriff’s Office said “What goes through my mind is I hope that the dog gets a hold of these guys and they decide not to shoot my dog or myself.”   When he found the first suspect, Deuce bit into his shoulder to detain him until officers caught up, then he repeated the drill with the second suspect. “He’s mostly a locator tool,” Perdomo said.  “We’re not really into biting people,” he said, but in this case Deuce found the measure necessary. 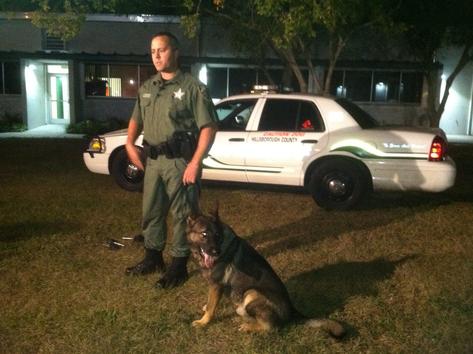 As a result of his incredible efforts, police were able to arrest the 2 suspects, who have been charged with armed home invasion, aggravated battery, felony possession of a firearm, grand theft of a motor vehicle, and resisting arrest without violence.  The pair allegedly kicked in the back door at a nearby home and shot 3 people then fleeing in an SUV. After crashing through a fence in a swampy area and getting stuck, the pair fled on foot and were eventually found by the amazing Deuce.

Deuce is 7 years old and has been paired with Perdomo since 2007.  The two live together and have developed a very strong bond over the years, “He’s just like a family dog,” Perdomo said.  Deuce’s reward for a job well done was a sausage biscuit, one of his favourite treats.