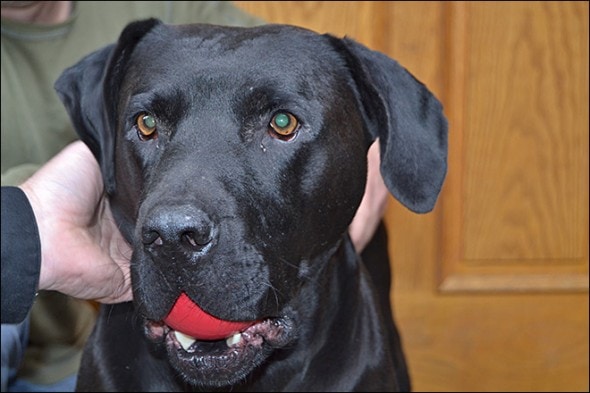 Sampson, a black Lab, was missing for five days before he was found trapped in a ravine. Police rescued the dog and reunited him with his family on Monday.

Sampson went missing on New Year’s Day. The Herbst family spent every day since his disappearance searching for him, posting flyers and getting the word out on Facebook. There was no sign of him until Monday. As Deputy Jerry Rippe with the Clackamas County Sheriff’s Office spoke with the Herbst family about what else could be done to help with the search a call came in that someone had found a trapped dog.

A man several miles away had heard a dog whimpering in the woods. Deputy Rippe responded to the call and found Sampson six feet down a ravine trapped by some rocks. Deputy Rippe put on a helmet and knee pads and climbed down to Sampson. He brought the dog safely out of the ravine and reunited him with the Herbst family.

Deputy Rippe said Sampson seemed to be doing well though he appeared to have been trapped for several days.

1 thought on “Deputy Rescues Missing Dog Trapped in a Ravine”