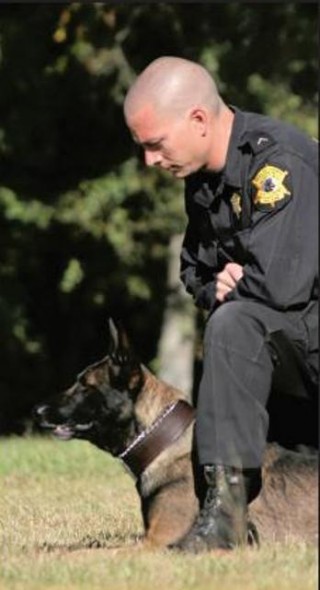 Law enforcement officers sat in a Columbia, South Carolina courtroom Monday to watch the sentencing of a man who killed one of their own. 24-year-old Maurice Anton McCreary, who killed K-9 officer Fargo two years ago, was sentenced to 35 years in jail.

In December of 2011 McCreary ran from officers after an armed robbery. Officers, including K-9 Fargo, chased after him. As he ran McCreary fired several shots at the pursuing officers. Fargo was shot three times and died later at a veterinarian’s office.

On Monday McCreary pleaded guilty to five counts of attempted murder and the unlawful killing of a police dog.

Despite two years passing, the loss of Fargo was still emotional for several officers. Deputy Adam Oxedine, who was with Fargo and his handler Deputy Warren Cavanagh the night of the shooting, fought back tears as he spoke before the judge. He asked the judge to consider the loss of Fargo in his sentencing.

Both Fargo’s handler Officer Cavanagh credits Fargo with saving the lives of the other officers that night.

“Fargo was part of our family,” Cavanagh said. “Fargo did what he was trained to do. He made the ultimate sacrifice so all of these officers could go home to their families.”

Judge Robert Hood after hearing the emotional pleas from Fargo’s fellow officers sentenced McCreary to five years for killing Fargo and 30 years for the attempted murder of the other officers.