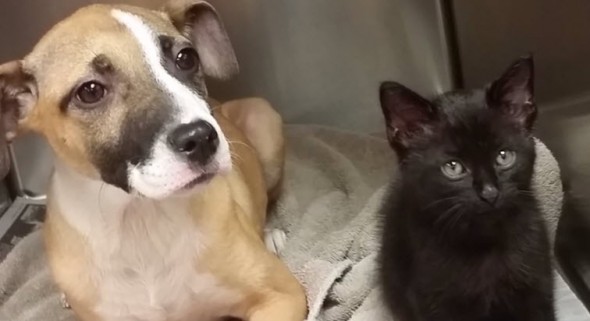 Chris Ouwerkerk, a rescue driver for the Michigan Humane Society, saved the lives of a puppy and a kitty after the two pets were abandoned in a Detroit home.

Last November, Ouwerkerk responded to a call about an abandoned puppy. When the rescuer arrived at the location, he found the dog taking cover from the cold rain in between a garbage and a recycling can.

“I noticed in front of the abandoned home there was a garbage can and like a recycling can, and there was a puppy sitting in between them,” said Ouwerkerk. “As soon as I stopped and got out of the van the puppy got up and looked over at me. I was like ‘come here puppy,’ and she ran over. She was just happy and friendly. I picked her up and when I picked her up I heard a really loud meow that was from a kitten. I started to look and there was a kitten in between the garbage can and the recycling can also.”

Ouwerkerk couldn’t leave the kitty behind, so he too was rescued.

The pets, named Camarin and Tomas and were taken to the Humane Society were they both received treatment.

Ouwerkerk recognized that Camarin and Tomas had built a strong bond while surviving life on the streets and therefore he transported them in a crate together.

Both animals have since been adopted.