Tom McPhee and WA2S Films got some amazing footage of the Detroit Pit Crew, using the new popular smartphone game Pokemon GO! to make a bit of a game out of the important rescue work they do.  All things considered, we’d have to say they were quite a success!

This is what Tom had to say about it:

The WA2S Film Crew went on an exploration of Detroit using the new game, Pokemon GO.  We wanted to see if we could use it in our efforts to locate strays dogs and turn the American Strays Canine Survey into a game…

We spent some time driving through areas that are known for having dog activity but it appeared to be a quiet morning until we made our way to the Northeast and had a few more interesting interactions.

The first was with a young man who I would guess was about 15 years old; he was walking with an unleashed dog on the sidewalk of a neighborhood that had seen better days.  We stopped to say hello to find that this was his new puppy – a beautiful gray dog, likely a pit bull terrier.

We inquired as to whether he was aware of any stray dogs in the area and he directed us to the park a few blocks away.  There was something about this young man that touched me and I truly hope that his future is bright.

We drove around the park that our young friend directed us to but didn’t come across any loose dogs.  So we continued.

A few blocks from that park we slowed to ask a group of guys if they knew of dogs in the area but they were less than interested in helping us and almost immediately waved us by; we moved right along and didn’t look back.

During this time it was apparent that we were outsiders in a neighborhood that being carefully watched by its inhabitants.  A red truck that was ahead of us turned around and came back likely to determine if we were friend or foe.  We decided it would be best to move out of that neighborhood.

Across a major road and in yet another neighborhood we spotted a dog tethered to a chain link fence at a house that appeared to be abandoned.

I took some video and we kept moving, knowing that this neighborhood’s watchful eyes were likely on us.  The dog, a tan pit bull, was showing his ribs but was not emaciated; however he needed food, water and shelter.  He needed help but was not on death’s door; at least not from starvation. 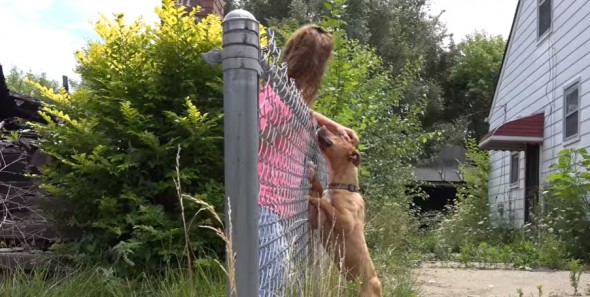 We sent out a message to our rescue friends for help and Terri Sumpter of Detroit Pit Crew Rescue came to help.

Terri spoke with a neighbor who told her that someone lives in the house and the dog is owned.  This meant that it is illegal for Detroit Pit Crew Rescue to pull the dog, no matter the condition of the dog.  This neighbor apparently called the owner of the dog, who allegedly lives in the house, but he was not at home, nor could we find out when he would return.

We proceeded to film as Terri checked on the dog’s state while additional neighbors emerged from their homes to see what was going on.  Terri spoke with a man and asked if the owner of the dog was feeding him and he said no, so Terri offered to bring food.

This man said the dog had only been there a couple of days.  In the meantime, more men came from the home across the street…. to play basketball.

As I was filming Terri with the dog a car drove by yelling something and lofting a full plastic bottle of juice out of the car and at us.  It landed on the ground with a thud about 2 feet behind me.  It was clear that we were not wanted in their neighborhood.

Terri made it clear that her mission is to be sure that the dog is taken care of with food and water and that she would help in that regard.  This was not the time or the place to make these people suspicious of what we were doing there.  It was time to make our exit.

Detroit Pit Crew Rescue left the scene and we made our way back to our car for a swift departure.

This scenario shows a slice of what is going on in some Detroit neighborhoods.  Was the dog owned by someone who lives in the house?

Was the dog owned by someone down the street and tethered at an abandoned house?  What would this dog’s purpose be for the owner?  Will this dog be there tomorrow if Terri goes back to give them dog food?

These are questions that we may never have the answers to.  With all that is going on in the United States right now, rescues must be very careful in their earnestness to help dogs; they must be vigilant while doing their good work; they must keep themselves safe while trying to keep the dogs safe as well.