Kristen Kelly first met Casey on a rainy December night in 2007. The thin, traumatized Sheltie was wandering along the side of a rural Jackson County, Oklahoma road and would not let her approach it. 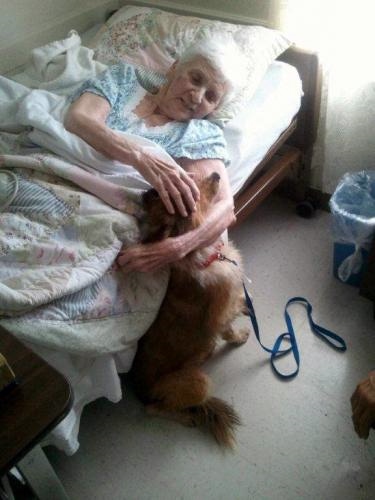 Armed with food and determined to save him, Kelley would spend the next two days in pursuit of the dog before finally catching him. When she did, the reason for his fearful nature was apparent: a boot shaped bruise on his abdomen and overall soreness pointed to a substantial beating. Kelley took him home, cleaned him up and gave him time to recover.

When Kelley’s mother-in-law Oleta heard of the rescue, she asked if she could take the dog in. Kelley said she was hesitant at first, believing that the elderly woman would not be able to handle a typically energetic Sheltie, but Oleta persisted.

Kelley gave in, Oleta named the stray Casey, gave him love and shelter, and fell madly for him. The dog settled into her home like he had always lived there, becoming protective and passing his days chasing mailmen and Meals on Wheels volunteers. It was a perfect match.

But then in March, Oleta was moved to a nursing center after suffering a stroke. Casey moved in with Kelley and her family on their farm in the country, driving to town with them to visit Oleta frequently. As the months passed, he adjusted and seemed relatively happy. He was even seen chasing the UPS driver on occasion.

The Kelley family departed for a six day trip in August, leaving Casey and their other pets in the care of a friend. They were gone for three days when their friend called to tell them that Casey had run away. They returned to conduct an extensive search, but after days in broiling summer heat with no sign of the dog, they assumed that he succumbed to the elements and told Oleta that her friend was gone. She was heartbroken.

Until the night of September 19th. A nursing home aide noticed a small, dirty, thin dog trying to get into the building. He looked oddly familiar to her, but in his ragged condition she failed to recognize him. When Kelley’s husband visited the next day, the aide told him about the four legged visitor. He was not convinced that it was Casey. 50 days had passed. Late summer heat had been unrelenting, and the nursing home was more than eleven miles from the Kelley farm.

He was wrong. The little dog had persevered, and while nobody knows exactly where his arduous journey led him, he ended up exactly where he wanted to be: on Oleta’s doorstep. The two enjoyed an emotional reunion shortly thereafter.

Casey is back on the Kelley farm, still gaining weight and recovering from his adventure. His coat is growing back, and he’s beginning to look like his old self again. Oleta will be 91 in November, and says she is looking forward to celebrating many more birthdays with her best friend, who is now watching over her family, keeping them safe – and chasing the UPS driver with renewed enthusiasm.