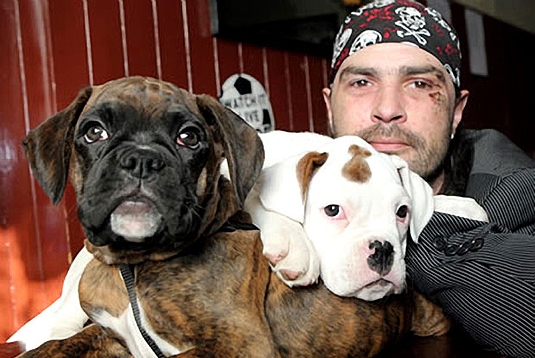 A brave and dedicated dog lover from the UK is making headlines for fighting off three armed thieves who tried to steal his two boxer puppies.

The incident happened as Richie Gaston made his way home from his Inverness pub, The Phoenix Bar. Gaston was walking his dogs when he felt one of the leads get lighter and looked up to see a man lifting up his 10-week-old, Rascal. He knocked the dog-napper to the ground before another thug appeared and tried to snatch his other pup, Bruno.

Gaston threw a punch that knocked the criminal down. Then a third dog napper appeared, flashing a knife. “Then another guy came at me and I saw the glint of a blade,” Gaston said.

Determined to protect his pets, Gaston kicked the knife out of the punk’s hand before losing his footing. “I slipped and he started booting me on the head. I pulled the dogs towards me as they were terrified but then I flipped. I jumped to my feet, grabbed the guy and threw him head first over a fence. They all ran away.”

After a thorough and proper beating at the hands of the loyal dog guardian, the battered dog nappers fled, leaving Rascal and Bruno safe in the arms of their defender.

A spokesman for Northern Constabulary said: “We are appealing for anyone who may have witnessed the attack to contact police. Our inquiries are ongoing.”