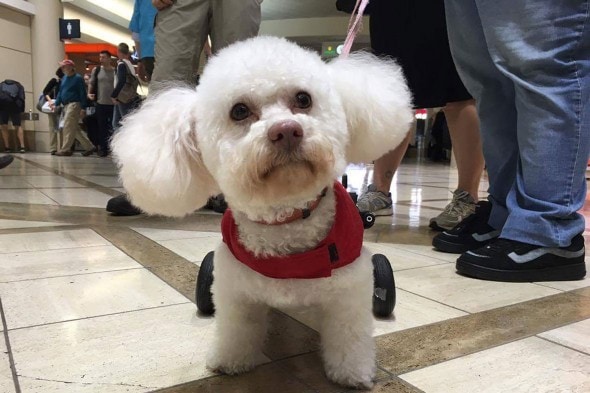 Susan Fulcher has dedicated her life to helping dogs.  For 40 years, she worked as a groomer and it was through the many interactions she had with the dogs she worked with that eventually brought her to rescue.  She started out small, doing foster work when she could, but what started small has become a full-time gig, and a labor of love.

She started Dharma Rescue on a customer’s suggestion.  It’s a non-profit animal rescue organization that takes disabled dogs from high-risk/high-kill shelters, and transforms them into full-time working and therapy dogs.

“With paralyzed dogs, they don’t get adopted, but I believe that every animal should live to its fullest. They live a longer life with us,” said Fulcher to PEOPLE.

The first dog she rescued was called Joey.  Joey was a paralyzed pup who was set to be euthanized.  Like Fulcher had said, it’s not very often that these special needs dogs get adopted at all.  She was able to rescue him just in the nick of time.  She said that all she had to do was look into his face just one, and she could see all of this potential. 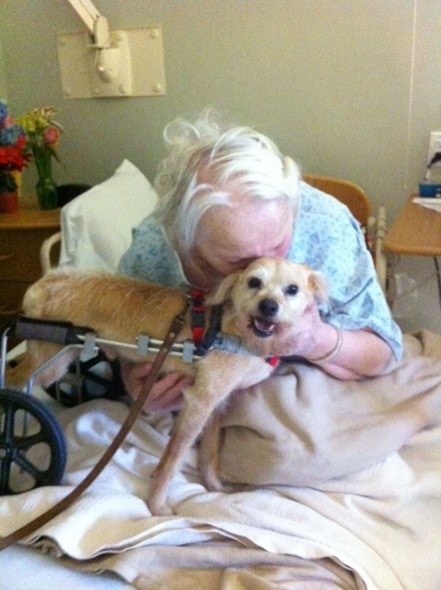 She then started Joey out on an obedience class.  She made sure to find one that would be a bit of a challenge for him, but one that with a little work he could overcome.  It took a little bit, but eventually, Joey began to fly through training.  After a lot more work, she was able to have him evaluated by the Alliance of Therapy Dogs, and they eventually certified him for therapy work.

Flash foreword to today, and Dharma Rescue has worked with several dogs in much the same way.  The therapy dogs that work with Fulcher do a lot of good for a lot of people.  They provide comfort for travelers at the Los Angeles International Airport, and also visit schools and nursing homes. Fulcher calls it fulfilling work that has made a noticeably positive change in everyone.

“Taking these dogs where their past is just the worst, in situations where they would die without this, and they come into this new world and new life, where they are loved and groomed and get to go out.  It’s just in their eyes when they look at you, like they didn’t know that this is what life could be like,” said Fulcher.

The final aim of Dharma Rescue isn’t just to create a fleet of therapy dogs, but to also find forever homes for these dogs as well.  Hopefully, the people they get adopted out to will choose to continue the dog’s therapy work.  Fulcher wants to show people that just because some of these dogs may have disabilities, doesn’t mean they aren’t every bit as worthwhile as any other dog.