Duffy is a dog with diabetes, and like many others with this disease, had trouble with his eyesight.  Eventually, the disease left Duffy almost completely blind.  Duffy received eye surgery and can see again, and judging by the video, I’d have to say Duffy is one happy dog to be able to actually see his family again.

According to a post about a video on Reddit, it was months since Duffy could actually see his family members.  They noticed something may have been wrong when Duffy started to pee in the house.  He was taken to the vet, and it was determined the Duffy’s blood sugar was totally out of whack.

“Within about three to five months he went from being a totally normal, eight-year-old dog to a dog who was completely blind,” BenZino21 wrote on Reddit.

Duffy had eye surgery this past January, and it seems to have worked very well.

“Obviously he’s still diabetic so he still needs to receive an insulin injection twice a day, but the surgery to repair his eyes was a total success and he hasn’t developed any problems or complications with his eyesight,” Benjamin May, Duffy’s owner, said.

As you can see by the video, Duffy is just one happy dog to be able to see his humans again.  Duffy is clearly loved, and very well cared for. 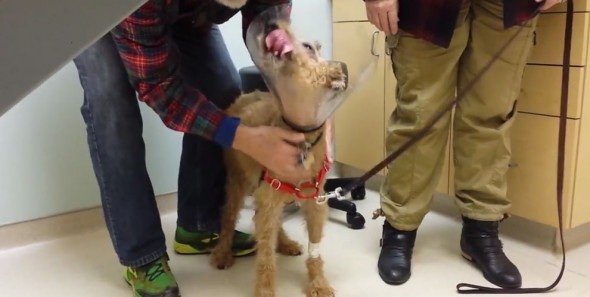