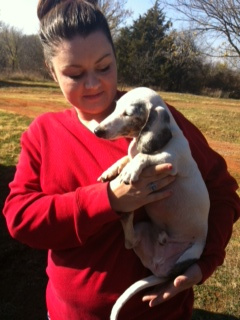 When Katie Crosley woke up to her dog True barking early Sunday morning she thought he had to go outside. Instead what she found was her house engulfed in flames. Crosley lost everything in the fire, but thanks to True she and her 7-week-old son made it out alive.

Crosley rescued True when no one else would. The Dachshund is blind, deaf and only has three legs. Despite his disabilities he was able to alert Crosley, saving her and her 7-week-old son Jace. An electrical short ignited the house in flames making it impossible to get out the front door. Katie, Jace and True had to navigate through the smoke out the back door. Crosley believes what True did was a genuine miracle. “He deserves a lot of loving. I’m glad that we saved him,” she said.

The family lost everything. The Red Cross is putting them up in a hotel until Thanksgiving morning, but then the family has nowhere to go. A fund has been set up at Chickasha Bank and Trust in Chickasha, Oklahoma. The banks phone number is 405-222-0550 if you would like to donate to the Katie Crosley relief fund.