Two British women were banned from owning pets for five years after a Staffordshire bull terrier type dog was discovered to have spent about two weeks living in a scorching-hot car surrounded by its own feces.  Saimi Bi, 26, and Kiran Hussain, 19, purchased the dog from someone on their street for about $80.  The dog, named Bella, was not allowed to live inside and was forced to stay in their car in the midst of summer.

When Bella was found on July 17 she was emaciated, dehydrated and living in squalor, trapped inside the tiny, sweltering car.  Sarah Briscoe, the RSPCA investigator who found her after receiving a tip-off, thought she was dead upon first glance.  Bella was immediately taken to an animal hospital and put on a 48-hour drip to rehydrate her.

“The dog was almost skeletal with rib and hip bones sticking up clearly visible, feces was all over the car and there were flies,” Prosecutor Nigel Monaghan told the court.  “What happened to the dog has traumatized the dog so much that it soils itself if it gets near a car.”

She is also a bit afraid of leashes since her experience with her leash being tied to the emergency brake.

Hussain, who was pregnant at the time, alleged that Bella was allowed in the home at first, but soon became violent towards her and she worried about the safety of her pet budgies.  She also said that when Bella would get in the car it was difficult to get her back out.

Defense attorney Zanfar Khan said, “She holds her hands up and she should have sought help and done more for Bella.  They are apologetic and upset about the trauma and suffering Bella has gone through.” 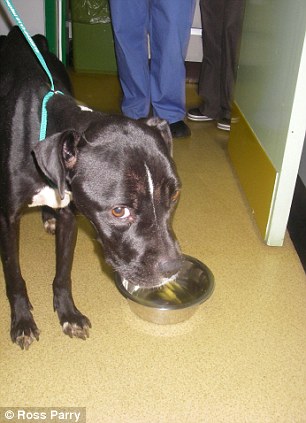 British laws and punishments for animal cruelty vary from those in America.  The two friends pleaded guilty to causing unnecessary suffering to Bella.  Bi initially fought to keep the dog, but claimed that she loved her and agreed to sign her over to the RSPCA.  In addition to the five-year ban from owning animals, Hussain and Bi will each have to pay a little over $400 toward the case’s costs, perform 100 hours of community service and have a 15-day low-level activity requirement.

Bella has since recuperated from her horrendous ordeal.

“She is absolutely a superstar; everyone loves her,” Briscoe said after the case.  “Bella was the thinnest dog I had ever seen, by far.  You think you have seen it all but this is one of those jobs that sticks with you.  I’m happy she has been signed over and can be rehomed as soon as we are able to and I am happy they have been disqualified from keeping animals.”