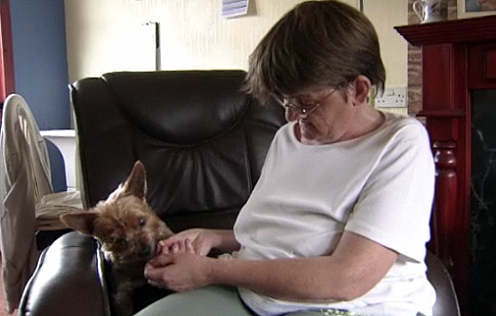 When two teen thugs tried to steal her dog, Lorriane Hallas found herself in a fight or flight situation, and fight she did. The disabled 51-year-old Scot was walking her Yorkshire Terrier, Simba, when she was approached by two young men who demanded that she hand over her dog. When she refused, they pushed her to the ground. That was a tremendous mistake.

The ruffians did not realize what they were up against. The fervent dog lover, cancer survivor and scoliosis sufferer  was concerned that her constant companion of ten years would be in peril in the care of strangers: Simba suffers from a heart condition that requires daily medication.

The thieves expected to walk away with a dog – instead they left with bruises after Hallas lashed out at them with her cane and connected. Surprised by her resistance, they bolted.

Hallas was not injured, but was extremely shaken as a result of the attack.

The incident  took place at around 3pm on Saturday near Liff Terrace. The attackers are described as 16 to 18 years old, about five feet two inches tall and slim, both wearing dark blue hooded sweatshirts. They were last seen approaching Linton Road in the direction of Camperdown Park. Tayside Police ask anyone with information about the incident to contact them at 0300 111 2222.

5 thoughts on “Disabled Woman Fights Off Dognappers With Her Cane”