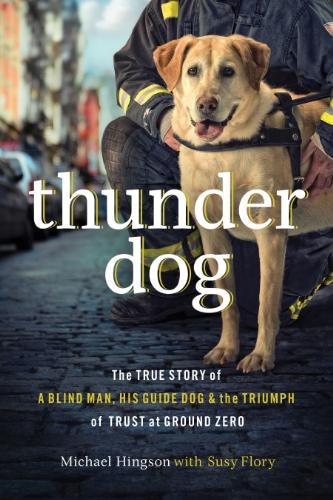 The remarkable story of a blind man and the guide dog that led him and dozens of others to safety just moments before the World Trade Center crumbled nearly 10 years ago has become an instant best-seller.  Thunder Dog: The True Story of a Blind Man, His Guide Dog & the Triumph of Trust at Ground Zero made its debut on the vaunted New York Times bestseller list this week in its first week of release.

Co-authored by Susy Flory, readers follow Michael Hingson and his yellow Labrador Retriever, Roselle, in a firsthand, moment-by-moment account of not only what it was like to be inside the World Trade Center when Tower One was struck, but of each painstaking step between the 78th floor and survival on the streets below moments before the tower collapsed just yards away.

“On one level, this is a book about the events of 9/11, but it is so much more than that,” said Brian Hampton, Senior Vice President and Publisher at Nashville-based Thomas Nelson Publishers. “It’s a beautiful story of trust and courage, an exploration of the unique bond between humans and animals. It leaves the reader inspired and full of hope. I believe that’s why it has impacted people so quickly and powerfully and why they are telling their friends about it.”

Hingson is also a national ambassador for the Braille Literacy Campaign and has recently launched “Roselle’s Dream Foundation,” the purpose of which is to assist blind children – and later blind adults – in obtaining new technologies.

Roselle, after navigating a number of ailments through the years – not the least of which were severe muscular atrophy and an auto-immune disorder that was believed to be have been brought on by the ingestion of the toxic dust generated by the destruction of the towers – passed away on June 26.  It was recently learned that she has been named a finalist in the 2011 American Humane Association’s American Hero Dog Awards.