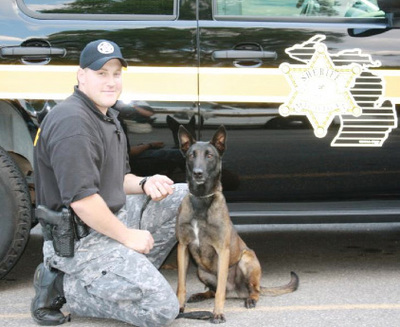 The Washtenaw County Sheriff’s Office is mourning the passing of a valued and loved member of their team.  Ziva, a 6 year old Belgian Malinois, had to be put down this week after a long battle with kidney problems, but her five years of dedicated service will never be forgotten.

ZIva was a narcotics and patrol specialist and she worked and lived with Deputy Gerrod Visel and his family.  She is known for many successes including sniffing out drugs, firearms, and even $1.9 million dollars that was hidden in a motorhome. Her duties also included  building searches, tracking, and assisting officers on traffic stops.  She came to the unit when she was 18 months old said K-9 unit supervisor Sgt. Steve Armstrong, adding “She was a star on both ends.  She was a very, very nice dog for us.”

Ziva is also credited with saving lives, as in the case where she helped find the unconscious body of a man who tried to commit suicide.  “We were searching for a few minutes, but then it got so thick that holding on to the leash was just getting in the way, so I cut her free,”Visel said. “After about a minute after cutting her free … she was barking about 30 yards in front of me,” he said. “Dispatch could hear the dog barking on the open line of the guy who had called 911. He was there unconscious.”

Ziva started having kidney problems about a year and half ago, but was able to keep working until a few weeks ago, much longer than vets predicted.  Visel and his family are devastated by the loss of their friend. “When she was at home she was a pet, lying on the couch, playing ball with my boy,” he said. “She knew when it was time to go to work. She was a housedog when she was home. She was a buddy to my 8-year-old boy.”

Though they will never forget Ziva, Visel has a new partner who joined the family about a week ago.  Karn, a 2 year old german shepherd will follow in Ziva’s footsteps, beginning active duty in May.

2 thoughts on “Distinguished Police Dog Being Mourned in Michigan”