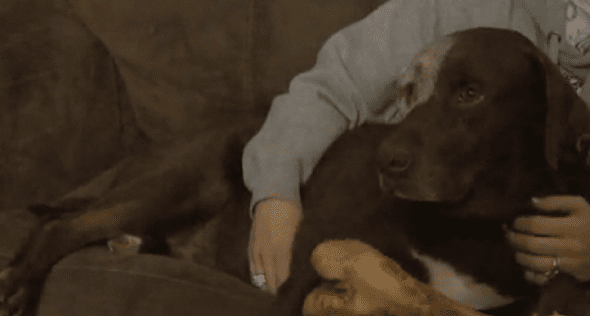 The Nagy family is crediting their dog Timber with saving their lives after she woke them up just in time to escape their burning home.

The Nagy family rescued a chocolate lab named Timber when she was found as a stray during Hurricane Rita. In May Timber was diagnosed with cancer and has been battling it ever since with chemo and radiation. Sloan Nagy has been driving Timber to Texas A&M for treatment and has paid nearly $15,000 to have her treated.

“I just lover her, and I don’t want to loser her,” said Nagy. Timber was given only months to live, but she has beaten the odds. Without her being alive on Wednesday morning the whole Nagy family might not be here.

A fire flared up in the family’s attic early Wednesday morning. Timber was the only one awake at the time. Timber went into Sloan Nagy’s bedroom and nudged her until she woke up. “She took her nose and was just nudging me,” said Nagy. “Normally if I say Timber, stop, she’ll leave.” This time Timber reused to leave and continued nudging Nagy.

When Nagy finally woke up she was shocked by her surroundings. “The house was filled with smoke. You couldn’t even see,” said Nagy. “I was in a panic.” Timber got Nagy and her 3-year-old daughter out of the house just in time. Firefighters say just a few minutes more and the heater would have fallen into the hallway. “We would’ve all ben trapped in our rooms,” said Nagy.

Nagy, her daughter and Timber all made it out safely and thanks to firefighters the home suffered minimal damage. “I couldn’t have asked for a better dog,” said Nagy. The Nagy family is planning a party complete with steak in her honor.