A struggling soap opera actor took his own life last week after he euthanized his dog, claiming that harassment by his condo association had forced him to betray his best friend. 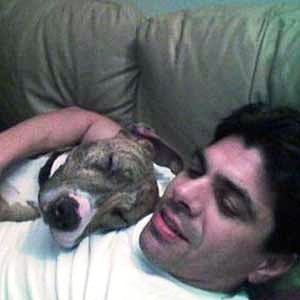 Nick Santino was found dead just a day after he put down his beloved pit bull, Rocco, on his 47th birthday. Santino, who appeared on All My Children and Guiding Light, blamed the board at One Lincoln Plaza (his apartment building) for the decision to put down the dog, saying that he and other dog owners were subject to constant harassment.

“Today I betrayed my best friend and put down my best friend,” a despondent Santino wrote in his suicide letter, according to close friend Stuart Sarnoff. “Rocco trusted me and I failed him. He didn’t deserve this.”

One Lincoln Plaza put strict dog regulations in place in 2010, including a ban on pit bulls. The regulations were grandfathered, but Santino said he and other dog owners were subject to relentless pressure to get rid of their dogs.

“People were complaining about his dog,” said neighbor Kevan Cleary. “It was open season on him.”

Rocco was prohibited from riding in the main elevators and bogus claims of excessive barking were filed against him.

“The dog was not a barker, but somebody complained that the dog would bark,” Cleary said. “He felt like he was in this battle because he was the only guy in the building with a pit-bull mix,” he added.

Another neighbor, Lia Pettigrew, agreed. “Everybody knows that he had been harassed by the building management.”

Santino made a last phone call to his former girlfriend at about 2 a.m. Wednesday. He was found dead in his bedroom Thursday from an apparent overdose of pills.

Apparently the pressure he was subjected to was just enough to force the actor to make a decision that he could not ultimately live with. A heart breaking note on Facebook from Santino indicated his frame of mind in the last few hours of his life. Despite his torment, his admiration for Rocco was clear. “I did not rescue Rocco, Rocco rescued me.”