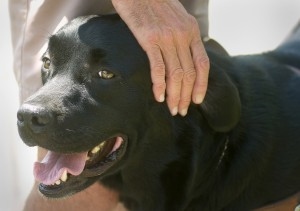 A Bensalem, PA man and his guide dog were not just refused service by a local doctor’s office – they were actually asked to leave the building.

Dr. Priya Punjabi demanded that Joseph Cichonski and his dog Hero leave her clinic on the 4th of August, saying that a large animal could frighten patients. Punjabi maintains that she has every right to decide who can and cannot enter her office.

Lawyer and advocate for the disabled, Rocco Iaculla, strongly disagrees. “You cannot exclude service animals except in very specific situations,” he said in an interview with phillyburbs.com. “Unless the animal is out of control or not housebroken or someone nearby has a severe allergic reaction, you must permit them in any area that the public is permitted. It has to be more than someone feeling uncomfortable with an animal present.”

Cichonski and his wife visited Punjabi’s office for her previously scheduled physical. While Cichonski’s wife was waiting to be treated, Punjabi approached him in the waiting room and told him that pets weren’t allowed in the office. The doctor told him to take his dog and leave the premises.

“I told her that it’s not a pet, it’s a guide dog, but she still said I couldn’t have him in there,” Cichonski told the newspaper. “How many pets do you know that can be declared on your federal income tax forms?”

Punjabi would not back down, so Cichonski left the office in order to avoid causing a scene. And then he called the police. His wife joined him after being told that she would not be treated unless the dog left.

Cpl. Michael Wojnar of the Lower Southampton Police Department arrived shortly thereafter and spoke with Punjabi. On Wednesday, Wojnar confirmed that a complaint had been filed.

Punjabi, who said she is afraid of dogs, maintains that the matter was handled appropriately. “We simply asked him to step outside,” she said. “I have my rights and my phobias, too.”

Meanwhile, Cichonski says he’s exploring his options. “I’m not trying to cause a fuss,” he added. “I just want to let people know that things like this are happening and I’d like to prevent them from happening to other people with disabilities.”