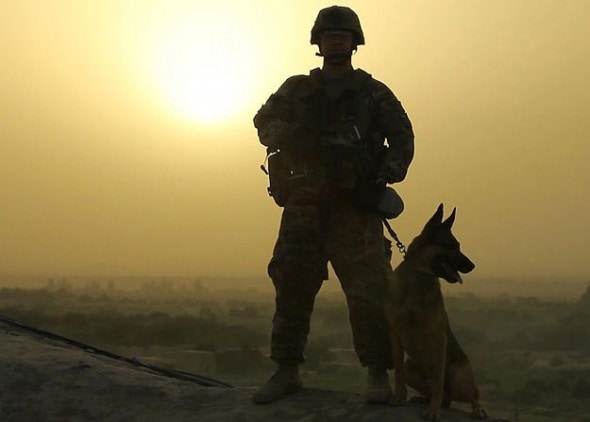 Tonight, Thursday February 21st, Animal Planet will premiere a documentary that will honor the military working dogs by showing viewers an up close look at all the amazing work they do.

The documentary titled “Glory Hounds” follows several military working dogs and their handlers on the ground in Afghanistan. It took Animal Planet a year to get permission to film the two-hour special. Once permission was granted the camera teams had to undergo specialized training before they were able to spend six weeks in Afghanistan embedded with the troops.

Animal Planet closely documented the handlers and dogs while they put their lives on the line sniffing out insurgents and explosives. The film looks not only at the training and incredible skills of these military working dogs, but also the special bond that develops between the handlers and their canine partners. “You’re not supposed to fall in love with your dog,” said one of the handlers, “but you do.”

The documentary focuses on four dogs and their handlers working in the remote firebases in Helmand and Kandahar, the two deadliest Afghan provinces. Cpl. Drew Nyman and his dog Emily are one of the teams followed in the documentary. He explains how his bond with Emily is stronger than with any human marine. “I spent day in and day out with my dog,” Nyman said. “It was just her and I, really, so I guess it was more of an intimate bond because we saw each other at our weakest and highest moments.”

The documentary will air at 8 PM ET/PT on Animal Planet.