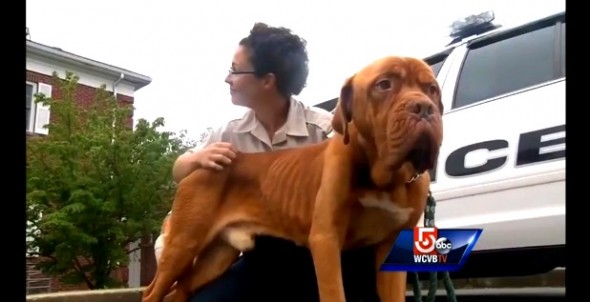 A starving Massachusetts dog, found rooting through the garbage, has been rescued and an investigation has been launched to find his owners.  The French Mastiff weighed only 76 pounds, half of his ideal body weight.  Now he is in a foster home, eating and packing on the pounds!

The dog, being called Braxton, was found in Acushnet, a town in southern Massachusetts.  He was so weakened in his emaciated state that he could barely stand.

“We will call it a drop off,” said Mattapoisett animal control officer Kathey Massey.  “Open the door to let him do his business, and take off.  That’s where I’m leaning.”

The two-year-old dog has no identification, and isn’t recognized by anyone in the area, so it is believed that someone from outside the area just dumped him.

“If that was my dog, I’d call out the National Guard,” Kathy said.  “I would be a little upset that my dog was missing.” 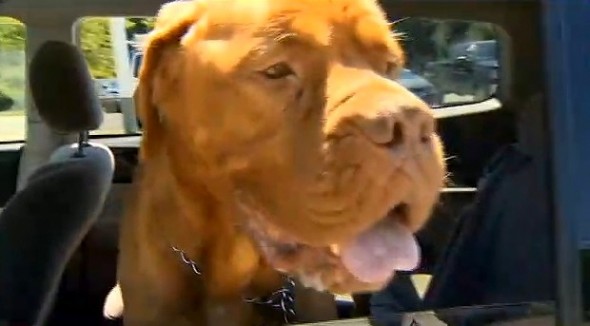 Animal control believes that he has been starved for at least the last two months, and is only half of what he should weigh.

“He is a wonderful dog and had a rough life,” said AC officer Kelly Massey, Kathy’s daughter.  “It just breaks your heart.  You want to cry.”

Now Braxton is slowly recovering with a loving foster family.  He is apprehensive around strangers, but hopefully with time and affection, his past trauma will fade away.  It is possible that he was once been in a happy home, but was abducted.

“Somebody put some kind of effort into him,” Kelly explained.  “He sits, he gives paw.  He is very content.”

Anyone with information, or who would like to give Braxton a permanent home in the event that no one steps forward to claim him, should call 508-400-8910 or click here.

“Somebody has to recognize this dog.  He’s a French Mastiff, not a Chihuahua,” Kathy noted.  “He’s a big boy and somebody out there knows this dog, where he came from.”