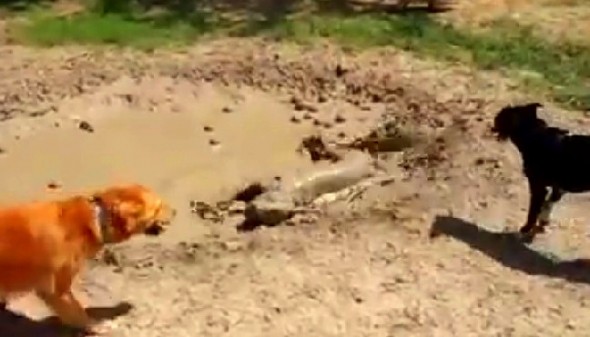 Brego the pit bull was on an ordinary trip to the park with his owner and some other people and their dogs.  But as soon as he spotted a new mud puddle, things took a turn for the messy, and he became a total “hippo-pig-alligator!”

The silly dog dove right in and wallowed in the muck.  Other dogs looked on, as if to say, “Get out of there!  You’re gonna be in sooo much trouble!”

His human was less than amused, particularly with the lingering odor that lasted for weeks, which was described as a cross between swamp water and dog poo.  Even after a hose-down and two baths, Brego stunk for weeks.

Has Brego been back to that park?  Not likely.  At least not as long as the gunky plashet remained!  But really, how can you put a price on a dog’s happiness?