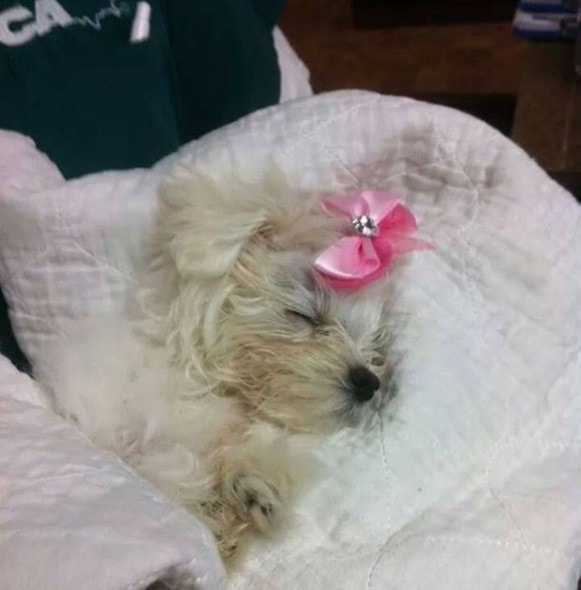 After being found by a group of good Samaritans tied up in a plastic shopping bag and badly injured, this 6-month-old Maltese/Shih Tzu mix is very lucky to be alive.  Although the dog is being cared for, she is still listed in critical condition and clings to life by a thread.

The dog is being held at the South Shore Animal Hospital in New Dorp, New York.  According to veterinarian Dr. Michali Berenstein, she was brought in with a fractured skull and right thigh bone.  She has been named Charlotte and is in the process of being transferred to a doggy neurologist for a better determination of the condition of her brain.

“She’s not out of the woods by any means,” said Dr. Berenstein.  “We’re just giving her as best a chance as we can, but we’re pretty worried about her.”

NYPD was called out to the scene of the abuse and began an investigation into who did this to Charlotte and why.  The person that had found her wanted to remain anonymous.  They did tell news sources that they heard the dog crying and whimpering from across the street on her walk home that evening.

After hearing the dog’s cries and finally figuring out where she was, the woman who found Charlotte, her boyfriend and a couple of their friends knew they had to act fast to get this little dog some badly needed help.

“I was horrified,” said the woman.  “We thought it was dead because it stopped moving when we opened up the bag.  Then it started moving again.”

The group that found her got a basket to place Charlotte in, and took her to the animal hospital on New Dorp Lane.

At this time, no donations are being taken on Charlotte’s behalf.  Doctors want to find out the total extent of Charlotte’s injuries over the next day or so.