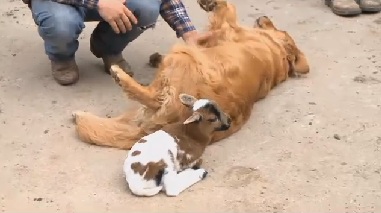 A 10-day-old lamb named Clover has found an unlikely mother figure since she lost her mother:  a golden retriever named Holly.

“A young animal, like a herding animal, like a sheep, they stress out very easily,” said Linda Lewis of All About Equine Animal Rescue.  “We tried to minimize the stress it was causing Clover and Holly stepped up to the plate.”

Holly is a rescue dog and understands how it feels to be abandoned.  She quickly took the Barbados cross lamb under her paw and treated her like a pup of her own.

“They still have the basic needs.  Holly is maternal and Clover needed someone to help care for her,” said Lewis.

Now the pair are joined at the hip.  Whenever Holly gets up, little Clover trots right after her.  And when Holly is ready to rest, so is Clover.

“Holly lays down, the lamb lays next to her; and that little lamb feels Holly’s heartbeat, feels the warmth of Holly against her,” said Lewis.

Despite the difference in their species, they understand love and affection.

19 thoughts on “Dog Adopts Lamb after Its Mother Dies”