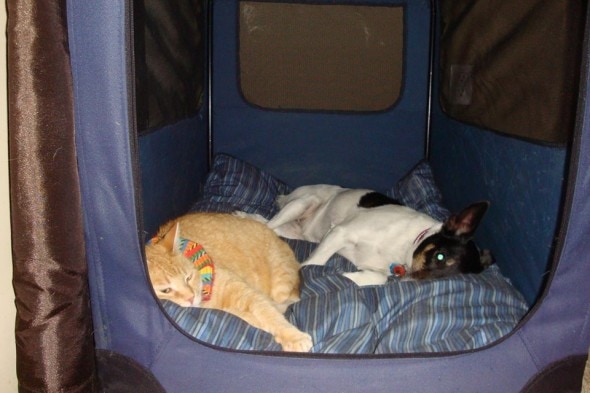 Kooky the cat and Gracie the dog never slept next to each other before, but when another of their brood died, they formed a bond by sleeping in her crate.

Tammy Matthews of Riverside, Missouri posted the sweet photo on Reddit after her dog Mauja had to be put to sleep.

“I had to put my dog Mauja down last Saturday,” she said under username Kandadka. “I didn’t think my other animals were missing her, and then this happened. Kooky and Gracie have never slept together before, but there they were last night, sleeping in Mauja’s crate.”

The white shepherd was 11 years old and was suffering from several forms of cancer, so the decision was made to have her euthanized. Shortly after, Matthews and her partner, Shea Friedel, observed some strange behavior from their remaining pets.

“My partner looked into the crate and noticed the dog and cat were both in there sleeping, which was unusual,” Matthews said.

Though Kooky loved Mauja, rat terrier Gracie had a Napoleon complex about her larger sibling, so to see her grieving came as a surprise.

Animals deal with the loss of a family in different ways: some seem to show no reaction at all, despite being close, and others may howl, even if they had a rocky relationship with the deceased.

“There’s a change in the household, so the animals react to it,” said Dr. Stephanie LaFarge, Senior Director of Counseling Services at the ASPCA. “It may manifest by pets refusing to eat or drink, eating less, being lethargic, and sleeping more.”

“As far as we know,” she said, “the animal can change behavior in a certain range, but it is a normal adaptation to the new normal.”

“The animals in that picture look like they’re dealing with grief in a very healthy way. The desire to lie next to something that smells like the deceased creature is not unlike a widow sleeping with her husband’s coat – the smell is comforting.”

“Grief is a normal human reaction to loss, and is probably a hard-wired reaction on the part of many mammals. Now that we look at animals more closely, we see that wild animals also show signs of depression.”

Matthews and Friedel are coping with their loss.

“Luckily, we have five other animals, so that helps. With her being sick, we knew this day was coming,” Matthews said. “She was a really great dog.”