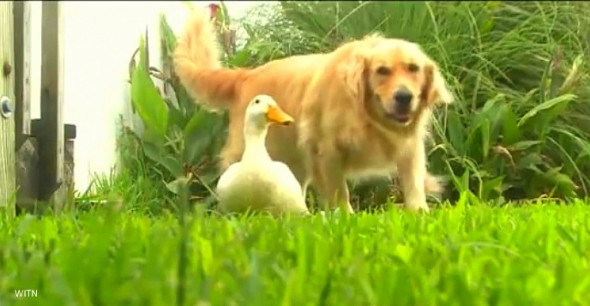 Occy the dog and Biggie the duck don’t care if they are different – they do everything together.  They eat grass, swim, wrestle, and nap with each other.  It actually seems that Biggie thinks he is a dog!

Frances Marsh says the duo became pals three years ago when Occy was a puppy and Biggie a duckling.

“I honestly thought Biggie would hurt Occy the dog at first because Occy was so young, he was just a puppy, so I wasn’t worried one bit and then the older they got they kept playing the exact same and Occy was super gentle,” she said.

Because they especially love playing behind Marsh’s Surf Shop in Atlantic Beach, the pair have become quite well known.

“Most of the time when people see them playing they’ll pass by here on their boats and they’ll stop and take a picture or video,” Marsh explained.  “I’m so used to it I don’t realize it’s odd, but apparently it is.”

“He definitely thinks he’s a dog.  He won’t even eat duck food, he eats the dog’s food and drinks out of the dog’s bowl,” Marsh said.

“I thought he would just join the other ducks behind the shop in the creek, but once he became part of the family, he became like our dog and didn’t want to join the ducks, and now he just lives with us and he’s just a part of our crew.”

These two look like they play roughly, but they’re actually quite affectionate towards each other.

“Once they’re worn out, you can come back here and Biggie will be sitting on top of Occy.  They’ll just be hanging out,” Marsh noted.