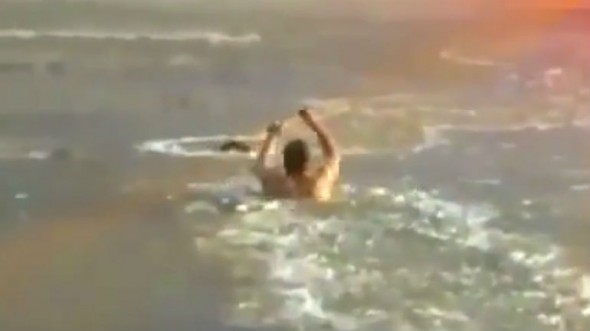 In an attempt to rescue his dog that had fallen through some ice, a man needed rescue just as badly after he was pulled down to the icy waters as well.

A 911 call was put out to the Dodge County Sheriff’s Office Central Communications department around 6:05 PM on March 15th.  A woman was reporting that her 65-year-old husband had fallen under the ice of their private pond.  He was attempting to rescue their Labrador that got trapped out on the ice as well, and was going under.

According to Sheriff Dale Schmidt, “The dog had fallen into the water so the man grabbed a stick and went out there to try and rescue the dog and broke through the ice.  In the meantime, his wife threw a gas can out there that he was using to stay afloat until help arrived.”

The first deputy on scene threw out an ice/water rescue throw bag.  It’s usually used by patrol staff to facilitate a less risky rescue, as no one else has to go in the frigid waters to assist.

“The dog climbed on the rope right away and was pulled out first. The man was pulled from the water and then transported by Watertown EMS to the hospital for treatment of hypothermia,” Schmidt said. “The man was in the water for about 17 minutes before the deputy was able to pull him out. The dog appeared to be fine and the man is recovering.”