Two men and a dog miraculously survived an emergency plane landing over the weekend near Juneau, Alaska. The plane landed in the Saginaw Channel, and overturned and sank just after its passengers were able to escape.

Pilot Robert Holmes said the Piper PA-16’s engine failed after takeoff from Handtrollers Cove. He turned back around toward the beach, but was unable to make it. He and the other passenger, Garrett Richardson, and a dog, made their way out of the aircraft. They were all uninjured, but stranded in the 450′ deep water.

Juneau residents Rick Berning and Kean Buttall were heading out to do some fishing when they noticed a commotion, and the good Samaritans took action.

“I was traveling from North Pass, the north end of shelter, to Handtrollers Cove. I saw a splash up ahead and thought it was a whale breaching and continued on up. But as we got to Handtrollers, we saw a dog getting out of the water and with no boat around so I thought that was kind of strange,” Berning said. “We kinda stopped and look and just then we heard someone yell. But it was out and away from the Handtroller, out in the open water. And we saw ahead and cruised over there and saw two people. They were very cold. We put them in the bottom of the boat and covered them with rain gear and ran them into their cabin.”

Alaska State Troopers were notified at 10:13 on Sunday of the plane’s emergency landing. The US Coast Guard, the Federal Aviation Administration and the National Transportation Safety Board were also alerted.

“They must have been in the water for 5 to 10 minutes. They were very, very cold. They weren’t talking very well,” Berning noted.

“A lot of times when a plane sinks in the ocean, the people in the plane are never seen again,” she said. 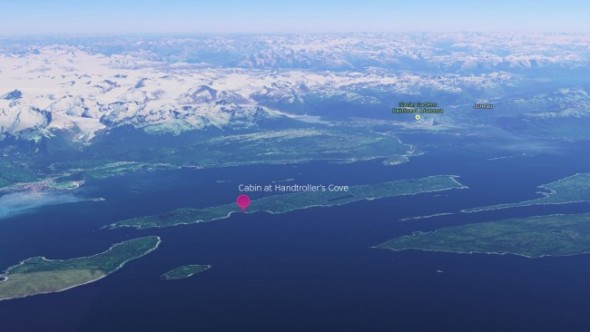