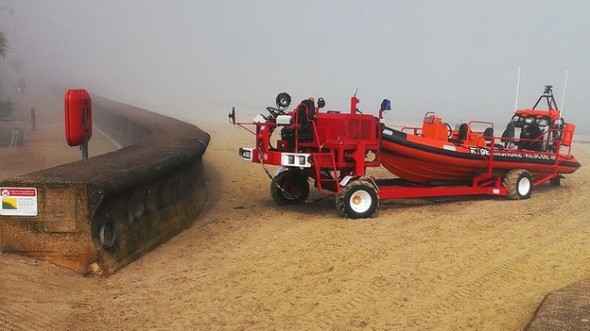 This morning, a woman and her dog needed the Coast Guard to rescue them after they were left stranded on Appley Beach in Ryde, Isle of Wight, during the rising tide.

The woman was disoriented due to heavy fog. Fortunately she had her cell phone at hand and called her husband for assistance. The husband called authorities and the Bembridge Coastguard Rescue Team was dispatched to rescue the woman and dog.

It was a difficult rescue since the woman wasn’t sure of her location. Rescuers called out to her until they successfully determined her position. When found, the tide had risen up to her waist and she had to carry her pet to keep him safe above the water level.

Karen Bosman, watch manager at Solent Coastguard, told Daily Echo “[that the woman] often takes her dog for a walk on the beach in this area, but this morning she was not aware of the rising spring tide.”

The canine and the woman did not suffer any injuries. This was a day they will forever remember.