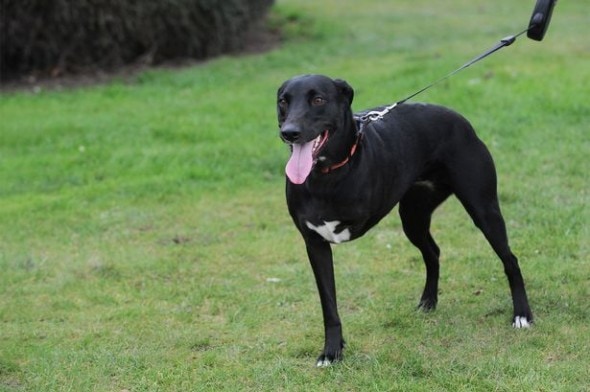 After losing her leg and nearly her life to a snake bite, Missy is on her way to a happy and healthy life again.

While out for her walk in St Mellons, Cardiff Missy’s owner, John Staniforth, noticed Missy had a limp. Staniforth and his wife Alison believed Missy must have scratched her leg, but made an appointment with their veterinarian to be sure.

The following morning though Missy’s leg had swollen to three times its normal size. When Missy arrived at PDSA charity’s PetAid hospital her life was in serious danger.

“On examination we noticed two small puncture marks on her foot plus the clinical signs which indicated she may have been bitten by a snake,” said Vet nurse Karen Jones.

For two weeks Missy received round-the-clock medical care as veterinarians tried to save her leg and prevent her going into renal failure. The leg wasn’t healing though and the decision to amputate had to be made. There was a serious risk of the infections spreading to the rest of her body.

The amputation not only saved Missy’s life but it brought her personality back to life. Under the constant care and having to have her leg dressed each day Missy had become withdrawn and depressed. Once her infected leg was gone she adjusted very well to only having three legs.

“She was walking and running on three legs as if nothing had happened,” said Alison Staniforth. “She was back to her old self and we were so relieved that we’d made the right decision.”

The Staniforths are so thankful for the care that PDSA provided Missy that Alison Staniforth plans to run in the Cardiff half marathon in October and raise money for them.

“Short of winning the lottery that’s the only way I can pay them back for what they’ve done for Missy and all of us,” said Alison Staniforth.