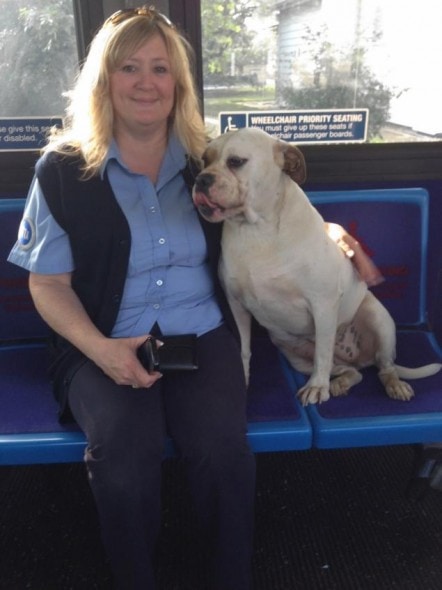 Early Wednesday morning an American bulldog mix surprised a lot of commuters when she boarded the S94 bus in Staten Island and casually made her way to the back bench and sat down. The dog had no tags and an unregistered microchip, but one animal rescuer was determined to track her owner down. A man in Florida had been searching for the dog after his ex-wife had given the dog away without his permission.

The dog joined a bus filled with about 15 to 20 passengers on Wednesday morning. Bus operator Deborah Samuels called the police who brought the dog to NYC Animal Care and Control’s Staten Island shelter. The dog showered transit workers with kisses as she left to go to the shelter.

Once at Animal Care & Control the dog was found to have a microchip, but it unfortunately had not been activated. Thankfully animal rescuer Phyllis Taiano did some extra work to help find the dog’s owner. She contacted the microchip’s manufacturer and found that the chip had been purchased by Michael Kanaskie over two years ago.

Kanaskie lives in Hollywood, Florida and couldn’t believe it when he received a phone call from Taiano telling him his dog had been found.

“My birthday is tomorrow,” said Kanaskie. “This is the greatest gift for my birthday.”

Kanaskie’s ex-wife had given away his dog Marly without his permission. He had given up hope of finding her again when Taiano called him.