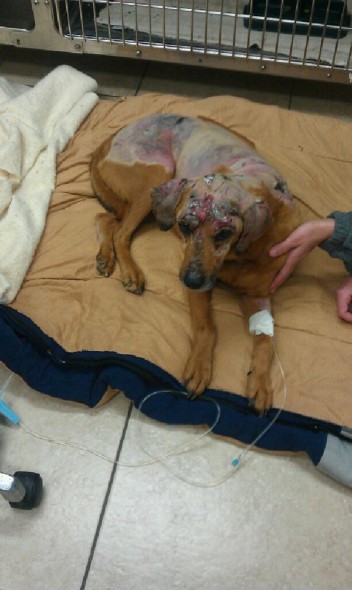 Peanut was enjoying a sunny day on her front porch when her house went up in flames. She was on a leash and couldn’t escape the fire until finally something fell on the leash causing it to burn. Peanut made it out of the fire alive, but has suffered severe burns over half her body and is fighting for her life.

Marye Blank had gone to vote on Tuesday and while in the voting booth she received a phone call that her house was on fire. Her ten-year-old dog Peanut was tied out on the porch when the house began to burn. Peanut was unable to escape initially because of her leash. “A witness said that he saw her and couldn’t get to her because the flames were so high,” Blank said. “She was on the porch literally barking from the heat of the fire.”

Luckily Mary had for some reason decided to put Peanut on a cloth leash that day instead of one of her usual chain leashes. Something fell on the cloth leash allowing it to burn and setting Peanut free. Peanut ran from the fire and was found a few hours later.  “At first we thought Peanut only had some burns on her side,” Blank said. “When we got her to the vet they shaved her hair and she had second and third degree burns over half of her body.”

Peanut was taken to White Oak Animal hospital initially but now has been transferred to LSU veterinary School because she has gone into renal failure and will need dialysis. Peanut’s situation is still very critical and support has already been flooding in for her and the Blanks after Yelp! Baton Rouge posted about her on their Facebook page. Blank is very grateful for all the support that has been coming in for Peanut, “Thank you to every body.” If you would like to help Peanut you can contact the LSU Vet School at (225) 578-9600.