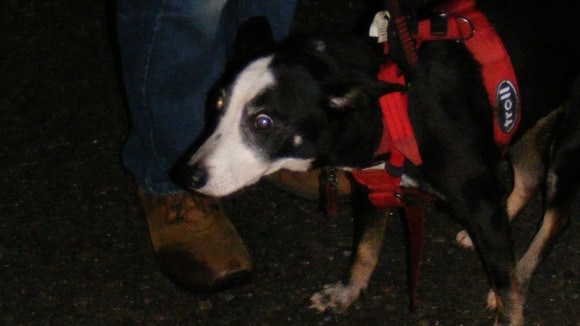 Steve McLachlan’s dog Sparky went chasing after some goats while they were at Grey Mare’s Tail near Moffat, Scotland. McLachlan lost sight of Sparky and he didn’t come back from chasing the goats. After missing for 16 days Sparky was found. It took a brave rescue from mountain rescuers to bring him to safety.

McLachlan and his family, including Sparky, were visiting Grey Mare’s Tail when Sparky spotted some goats. “He pulled away from us and disappeared down the slope chasing the goats and that was the last we saw of him or heard of him,” said McLachlan. The family spent hours trying to find him and returned again the next day to continue the search. There was no sign of him anywhere and McLachlan was worried, “We pinned a note up with my contact details more in hope than expectation,” said McLachlan.

Over the next two weeks McLachlan received a few contacts from people who heard a dog barking, but there were no sightings of Sparky yet. Finally McLachlan got word of a sighting, “Sixteen days later I had a call from someone who had seen a dog with a red collar matching Sparky’s description on a ledge on the other side of the burn in an inaccessible place.”

Rescuers from Moffat Mountain Rescue Team were called in to help Sparky. Seven rescuers came to aid with saving Sparky. “They had to cross the burn, work their way down to the point above Sparky and then they abseiled down almost into the gorge, into the spray more or less from the waterfall.” McLachlan is extremely grateful to the rescuers for their efforts to recover Sparky who considering his ordeal is doing well. McLachlan noted that Sparky was “quiet and subdued” and had lost some weight.