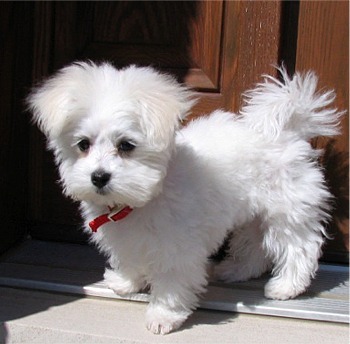 A Miami family was devastated Tuesday when they discovered someone had vanished with their nine-month-old Maltese puppy.  The Faulks checked their surveillance video and saw a man scoop up little Lebron and whisk him away under his arm.  According to dognapper Tony Williams, it was all a misunderstanding.

Lebron was playing in his backyard and slipped under the fence.  As can be seen in the footage, he was wandering around in the street and came close to being struck by a white SUV.  Williams exited the vehicle and picked Lebron up before any harm came to him.  He walked up on the front porch of the house and looked around, but never knocked on the door.  Unsure of what else to do with the seemingly abandoned puppy, Williams took him home.

The next day, Williams’ co-workers told him about the news story and surveillance video.  He immediately returned Lebron to his worried family, who rewarded Williams with $100.  James and Vanessa Faulk and their young niece, Christah Wallace, were overjoyed.

“He means everything to us.  He’s like a son,” James said.