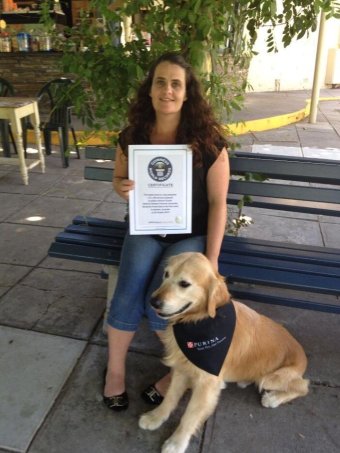 Charlie is a six-year-old Golden Retriever who is loveable and kind, but he has one fierce bark. Charlie has broken the Guinness World Record for the loudest bark.

Charlie was competing at a national completion in Australia last year when he registered a bark of 113.1 decibels. Guinness judges have now confirmed that bark has beaten the previous record of 108 decibels held by a German shepherd in London.

According to Charlie’s owner, Belinda Freebairn, Charlie’s loud bark started at a young age. “When he got a bit older, when he was about a year old, he just started to get that real deep bark and I knew he was really loud,” she said. “I think they roughly knew what the record was but I didn’t really think he could beat it, I must admit…but he did.” Luckily for Freebairn’s neighbors Charlie doesn’t use his bark often. “He doesn’t bark at home at all really, he’s really quiet.”