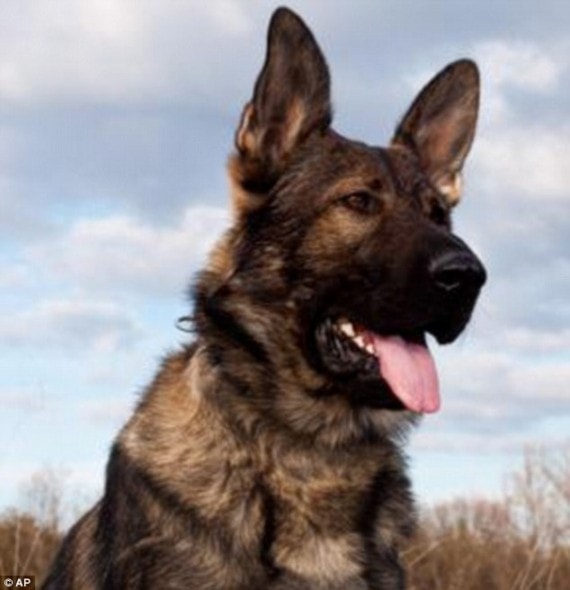 When a gunman was holed up in an abandoned bar in upstate New York it was an F.B.I. dog who became the hero. Ape, a Czech German Shepherd, gave his life to help bring down a gunman who had killed four people.

Ape was a trained F.B.I. dog who only began working with the F.B.I. last month after he completed his training last year. He was on his second mission with the F.B.I. as they were in pursuit of gunman Kurt Myers, who had shot six people, killing four of them.  Myers was hiding in an abandoned bar and had not made contact with law enforcement officials for hours. It was believed he was armed and dangerous.

Ape was first to go into the building with, equipped with a camera. He was followed by agents with the State Police and the F.B.I. Just as Ape came through the doorway he was shot in the chest. Officers quickly returned fire, killing Myers, and immediately turned their attention to Ape and trying to save him. They attempted CPR and rushed Ape to a veterinary office nearby. “We were trying to do everything we could,” said Dr. Emily M. Green, a vet who worked on Ape. Sadly, Ape passed away shortly after arriving at the vet.

Ape is only the second F.B.I. tactical dog to be killed in the line of duty. Freddy, a Belgian Malinois, was killed back in 2009 while assisting officers with an arrest. “Ape was doing what he was trained to do and made the ultimate sacrifice for his team,” the F.B.I. said in a statement. “His actions were heroic and prevented his teammates from being seriously wounded or killed.”

Ape will be taken to the F.B.I.’s headquarters in Quantico, Virginia where he will be buried. After his memorial service Ape’s name will be added to a memorial wall at the training facility. “He will be missed by his F.B.I. family,” stated the F.B.I.