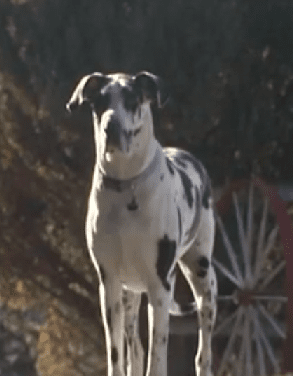 Rob Jerry and his dog Sadie were out for a walk on St. Patrick’s Day morning when Sadie started to act out of character. Sadie alerted Jerry to Albert Larson, their 89-year-old neighbor, who was  lying on their frozen driveway with a broken hip.

Jerry was taken Sadie outside but when he called for her she didn’t respond. Instead she stood still and stared down the driveway. “I heard something, but I thought it sounded more like a deer grunt,” said Jerry. He thought Sadie was just distracted by a deer but then he listened a little longer and realized that it was actually someone calling for help. Then he spotted Albert Larson lying in his driveway.

Larson had slipped on some ice while going to get the newspaper and had been laying there for over an hour unable to get up. Larson tried to keep moving and had inched his way up the driveway using his shoulder until he couldn’t move anymore. His clothes had frozen to the ground by the time Sadie came to his rescue.

Larson broke his hip and bruised his leg and shoulder when he slipped and he believes without Sadie he wouldn’t have been saved. “If it wouldn’t been for that dog barking, I’d still be froze to the driveway.” Now thanks to Sadie Larson was able to celebrate his 65th wedding anniversary this past Wednesday.