Louisville resident Gary Hickock is a dog lover with a sense of humor – and that’s a good thing. 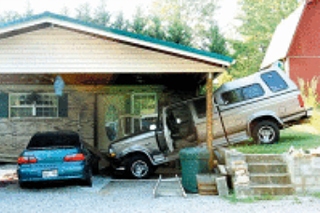 Last Thursday, Hickock was chopping down trees in a neighbor’s yard when his year-old Boxer/Lab mix, Sandy, decided to take his F-150 for a joyride.

“Once the tree started crackling my dog jumped in the front seat of the truck and put it in drive,” Hickok said. “I had the truck going just so I could do that, to pull the truck down, but the dog beat me to it.”

Sandy drove across the neighbor’s yard, crossed a large empty field, and promptly t-boned Hickok’s other car while it was parked in his carport. The car was totaled.

Hickock says he can’t help but laugh about the mess created by his dog. “I lost two vehicles in one hit,” he said. “In one shot.” The carport fared better: “At least it only took one post out,” he said, still laughing.

Despite the wild ride, Hickok said Sandy was just fine. “I think she’s OK,” Hickok said before demonstrating Sandy’s ability to sit, shake, lie down and roll over.