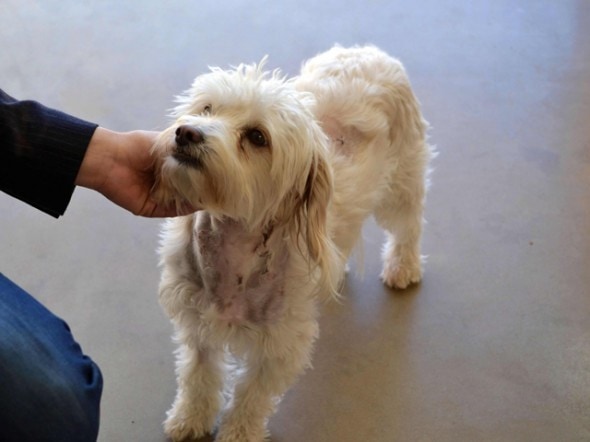 When a coyote came in to the backyard and threatened the life of a 7-month-old puppy named Lulu, the family’s other dog Sophie came to her rescue. 2-year-old Sophie was bitten several times but prevented the coyote from hurting Lulu. Now Sophie is looking for a new home.

When Sophie’s family brought Lulu home the 2-year-old Maltipoo quickly bonded with the puppy. In early January the two dogs were in the backyard of their family’s San Diego home when a coyote wandered onto the property. The family heard a yelp and when they went outside to check on the dogs they saw Sophie defending Lulu from a coyote. The family members were able to scare the coyote off but not before Sophie suffered bites to her neck, right shoulder and side.

The family rushed Sophie to the veterinarian who stitched her up. After the incident the family feared that they could not properly protect the two dogs and surrendered them to the Helen Woodward Animal Center last week. Lulu was adopted quickly. Sophie will not be available for adoption for another two weeks as she recovers from her injuries.