A new family and a new life for Hazel 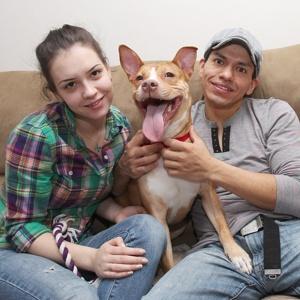 Remember Hazel, who was seen in shocking video footage with a man repeatedly kicking the cowering pooch in an elevator in Harlem last year?  Well, the tides have turned for Hazel, who now has a wonderful new home and family in Queen’s.

It ook two weeks to find Hazel and rescue her form her abusive owner, but investigators did not give up and eventually justice came for the lovely dog.  “It was an extensive investigation,” Jon Veiga, deputy chief of the Manhattan DA’s violent-criminal-enterprise unit.  “Our concern at first was that the dog was being beaten to be used as a bait dog, in pit-bull fighting,” Veiga said. “She looked submissive,” on the surveillance tape, leading investigators to wonder “if we had stumbled onto a dog-fighting ring.”

But that proved not to be the case, as her owner Brian Freeman, had no criminal record or involvement in gangs and is employed, working security at a Manhattan homeless shelter and studying public administration at Hofstra.  He was charged with a misdemeanor and sentenced to 25 days of public service.  He expressed remorse and shock at his own behaviour. “I’m terribly sorry,” Freeman said afterward.

Now Hazel has a fresh start with Richard Palacios and Natalya Prokenpenko, who said they did not know her story when they adopted her.  “When we saw the video, my fiancée started crying.”  Hazel is thrilled with her new home says Prokenpenko,  “As soon as we got her home, she started kissing me, kissing my fiancé,” and they look forward to many happy years together.