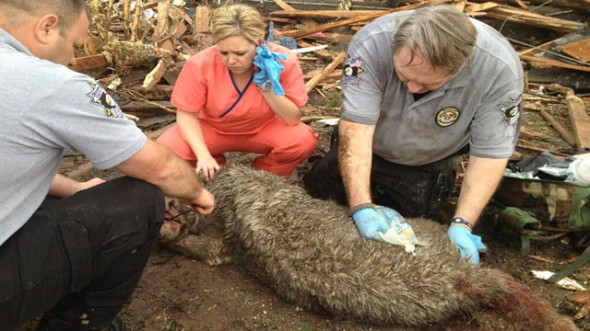 When first responders found Tala after the devastating tornadoes in Oklahoma, they didn’t think she was going to make it. She had been impaled by a piece of wood, but Tala is a fighter and she has surprised everyone by surviving.

First responders found Tala, a Timber Wolf mix, at the center of the destruction. She had been impaled on her side. She had a deep cut and her liver had been punctured. First Responder Dr. James Bugg worked to stop the bleeding and he did all he could for her. Unfortunately he was not allowed to transport her to a veterinarian as humans had to come first.

Finally someone in a pickup truck came and took Tala to the Boyer Veterinary Clinic. The First Responders who had worked to save her said a prayer for her before leaving her. Tala arrived at the clinic where they didn’t have any power because of the devastating storm. Dr. Ron Boyer and his team worked with flashlights to save Tala.

Tala wasn’t able to eat for almost a week after the tornado, but now she is eating, wagging her tail and healing nicely. She is expected to make a full recovery. She has also been reunited with her owner, but will be staying with Boyer until her owner has a home again.

For Bugg and the other first responders that helped save Tala they are just happy she is doing well.

“I just think it’s a heartwarming story, and I was glad to be a part of it,” said Bugg.