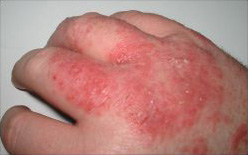 Upsalla, Sweden — Dogs are helping medical researchers unlock the secrets to human eczema. Non-invasive research with dogs suffering from eczema is assisting researchers led by Katarina Tengvall of Uppsala University in Sweden find better treatments for humans. Working with dogs, researchers have identified an abnormal skin barrier that may be the risk factor that causes the disease.

Ten to thirty percent of humans and up to ten percent of dogs suffer from eczema. Both canine and human eczema sufferers are easily irritated by pollens and certain foods. This leads to itching, scratching and infection vulnerable skin. The study focused on German Shepherds, who are among the dog breeds most susceptible to eczema. The dogs were not harmed in any way.

Swedish researchers compared DNA samples from healthy dogs with DNA samples from German shepherds that had eczema. They located the particular genetic segment associated with the disease. According to the researchers it is easier to find the structure of canine DNA than the areas that carry disease-risk genes.

Examining the DNA of dogs, the researchers found that a genetic region associated with eczema contains the gene PKP-2, which produces a protein important for the formation and proper functioning of skin structure. The findings were published this month online in the journal PLOS Genetics.