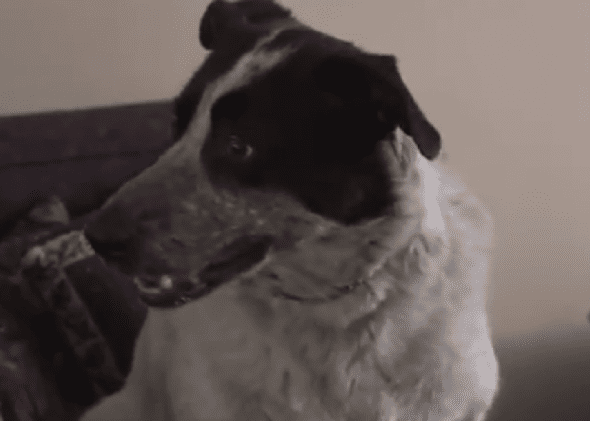 Like most people when Gregory Gould adopted his dog Snickers he was excited about getting a companion. He had no idea that Snickers would save his life last March. Now Snickers is being honored for his actions by being inducted into the Purina Animal Hall of Fame.

Last March Snickers was found pacing and barking outside a neighbor’s home in Oshawa, Ontario. It was early morning and Snickers refused to let the neighbors leave for work, so they called the police. When police arrived they figured out that Snickers belonged next door and went to check out the house. Then they looked inside a window they saw Gould collapsed on the floor.

Constable Rob Garnett and his partner broke down Gould’s door and rushed him to the hospital. Gould suffers from Chronic Obstructive Pulmonary Disease and relies on an assisted breathing machine. He collapsed when the levels on his machine were set incorrectly. Without the proper air Gould was slowly suffocating to death. Snickers quick action saved Gould’s life. Doctors say that if Gould had remained on his floor for one more hour he would not have lived.

While Snickers alerting neighbors and police to Gould’s collapse was remarkable, what was even more amazing is that Snickers had been locked inside his home when Gould collapsed. Constable Garnett found the glass on the back door of Gould’s home shattered and the latch triggered. Snickers had repeatedly slammed his body into the back door until it broke so he could get outside and get help. Once outside, Snickers had to also break through a fence to get to a neighbor. Then he spent two hours barking trying to get help from someone.