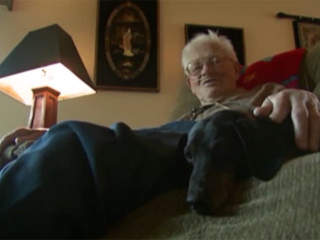 Vic Vicker’s loves his dog Gio, and Gio loves going to the dog park. When the 91-year-old man went to take Gio to the bear creek dog park in Colorado earlier this week, Gio jumped on the car’s accelerator and Vicker’s couldn’t get control back.

“There wasn’t anything I could do,” said Vickers. “He’s on my foot and the car going like heck.”

The car went through a fence and started careening down the road. It was headed straight for a creek.

“I was thinking that I would surely be able to get it stopped before going that far, but I couldn’t,” said Vickers. “Next thing I knew I’m in the creek.”

Luckily Vickers only sustained a few scratches and Gio was unharmed in the accident. It very easily could’ve ended much worse.

“I just thank the lord I’m here because I missed a tree that was 10 inches in diameter, if I had hit it, I wouldn’t be here,” said Vickers.

Vickers is happy that he and his best friend are both safe and doesn’t put any blame on Gio.

“I love him and it’s not his fault, he didn’t know what he was doing,” said Vickers.