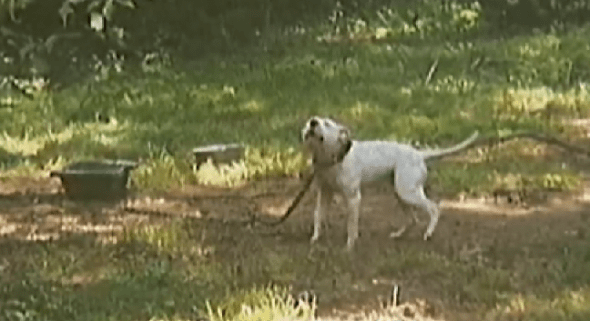 Steve Bailey says he was just trying to help a dog chained up in the summer heat. Bailey’s actions led him to be arrested though.

It was a hot July day when Steve Bailey says he saw a white pit bull named Zeus chained to tree with no food or water.

“There were buckets back there, but they were broken and wouldn’t hold water,” said Bailey.

Bailey, concerned about the dog’s safety, unchained the dog and took it home. He then called animal control. Instead of animal control though, the police arrived at Bailey’s home to arrest him. Bailey was charged with theft by taking.

“I never intended to remove someone’s property,” said Bailey. “I was trying to assist an animal in distress.”

Zeus’ owner, Deanna Fulton, tells a different story though. She claims Bailey broke her fence and was stealing Zeus to sell him. She claims all her dogs are well cared for.

She stated that she only chains the dogs outside when she makes a quick trip away from home.  However, it is illegal to chain a dog to a tree for any amount of time in Atlanta.

The Atlanta police are standing by their arrest of Bailey, but Bailey’s attorney believes his client has a strong case.

“He was trying to do what any citizen would do to take care of the dog,” said attorney Gerald Griggs.