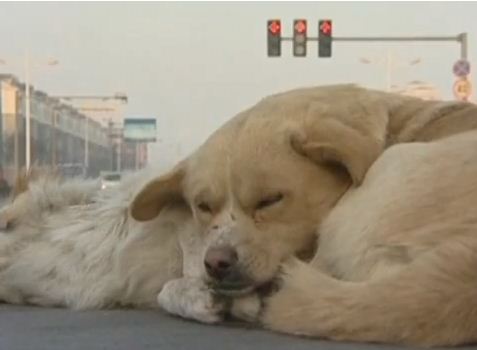 A heartbreaking video has gone viral on the internet of a loyal dog refusing to leave the side of another dog that had died. Despite freezing temperatures and traffic the dog refused to leave his friend’s side.

The pair was found on a road in the city of Yinchuan in north-west China on the night of December 22nd. The one dog refused to leave the side of his dead companion despite being in the middle of a busy street. Instead he stayed curled up with his friend. Locals placed a stool next to them to prevent vehicles from hitting them, but were unable to get the dog to leave his friend’s side.

The dog stayed by his friend all night even as temperatures dipped below 10 degrees Fahrenheit. The next day someone took the deceased dog to a nearby park to be buried and his loyal friend followed him and watched over him until the end.

What happened to the loyal dog after his friend was buried is unknown.