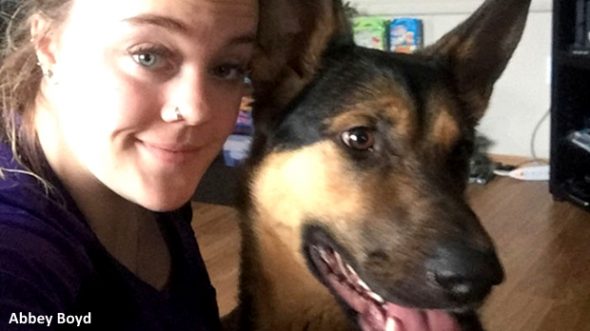 When Ted arrived at an SPCA in Canada, he was very scared, and wouldn’t even go outside for anyone.  He warmed up to a worker named Abbey after she gave him a treat, and the next day she was shocked to find him sitting on her porch!  She wasn’t looking for love, but love found her, and soon she’ll be adopting Ted.

The German shepherd-Akita mix arrived at the Northwest Territories SPCA in Yellowknife last Friday with a small cut on his nose, and was very apprehensive, refusing to let Abbey walk him that Saturday.

“He was scared. It’s a very terrifying place, first off, for dogs and cats,” Abbey Boyd told CBC News.  “He wouldn’t let me take him. Nobody could walk him for a day.”

She was determined to earn his trust and provide some comfort to him during this adjustment period, so she opted for the go-to move of dog lovers everywhere:

“I fed him cheese-flavored bacon strips to try to get him to love me,” she said. 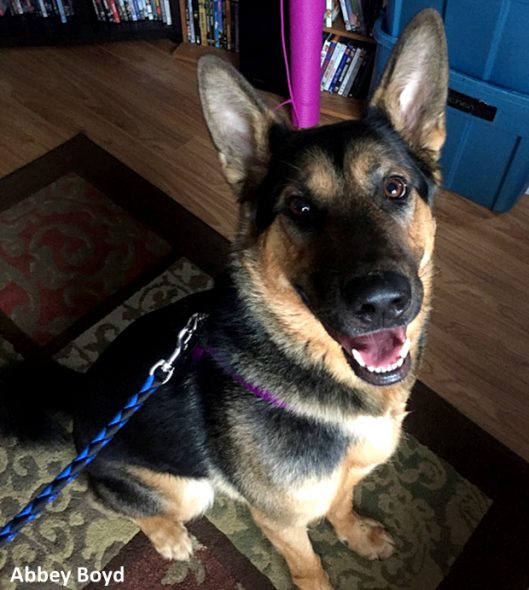 Afterwards, Abbey asked a maintenance man to construct a larger kennel for Ted so he would be more comfortable.

“Apart from that, I had next to no contact with Ted during my shift at the SPCA. I left and went home.”

Early the next day, Abbey went her other job at the airport.  When she arrived home a few hours later, she was surprised to see a dog sitting on her deck, barking at her.  She was a bit leery, not knowing what this dog’s temperament was.  Eventually she walked past him, but he trotted down the stairs and onto her property.  She was able to lure him inside, and when she did, she noticed a familiar nick on his nose.

It had to be Ted – but how?  She called the SPCA and learned that Ted had escaped his outdoor kennel and gotten through the chain-link fence.  Abbey lives over three miles away from the facility, but Ted was able to track her home.

“It doesn’t really make sense, how he would have chosen or found me out of all the smells,” Abbey said.  “”It’s just, it’s the weirdest, the most amazing thing that’s ever happened. 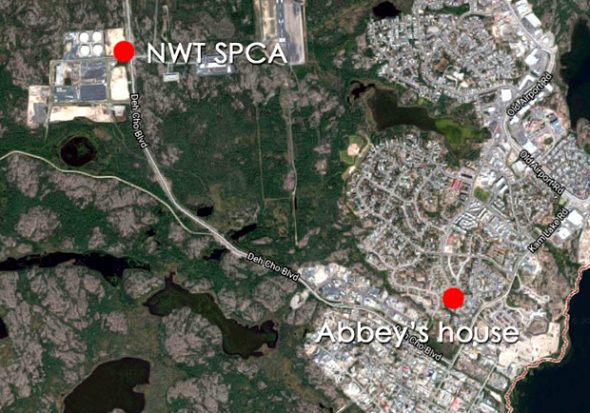 “It could be a complete coincidence, but I’m from Yellowknife. Everything’s a sign when it comes to animals.  I can’t ignore a sign like that. He showed up at my house, out of how many people [that] live here? All the dogs. All the smells. He chose my house – where I am.”

Ted has been returned to the SPCA, but now he lets Abbey to take him on walks with other dogs, never leaving her side.

“He still stays close enough and is always constantly looking back, staring at me,” she explained.  “It’s kind of put a new spin on my life.”

Not one to ignore what seems to be fate, Abbey has begun the adoption process.  Her current housing situation doesn’t allow dogs, so she will be moving in the next few months.

“[I’m going to] build my bond with him that apparently, he senses more than I do. [He’s] literally sitting on a platter ready to be loved and taken care of… He’s coming with me.” 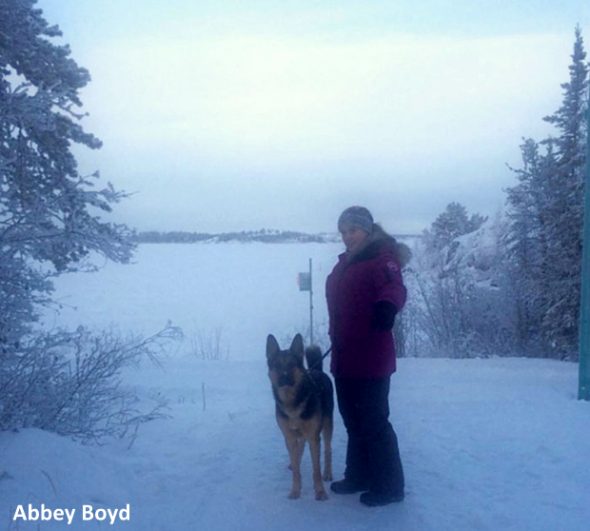 4 thoughts on “Dog Falls in Love With an SPCA Worker, Escapes, and Follows Her Home”