When Warren Muldoon made the decision to leave his late son’s beloved dog, Dakota, stranded on a snowy ledge above a 40-foot waterfall, his heart was broken, but it was a dreadfully cold day in February and the severely injured hiker had no choice.

He and the German shepherd had spent the morning climbing 10,064-foot Mount San Antonio, also known as Mount Baldy, in Southern California’s Angeles National Forest. On the hike back down, Muldoon missed a turn and couldn’t find the descent trail.

While attempting descent, he and the dog fell over two waterfalls. Muldoon, 60, was gravely injured, suffering a punctured lung, a fractured leg and five broken ribs in the fall. As he slid down a third waterfall, he assumed Dakota was behind him, but he was mistaken.

Terrified and whimpering, the dog was stuck on a ledge far above. Muldoon’s phone was broken. Hikers below spotted him and phoned for help. But although he pleaded with paramedics to rescue the dog, they refused. Muldoon was hypothermic; rescuers airlifted him out of the canyon. Dakota was left behind.

“They said it was a choice between saving my life and looking for her, but they would go back,” Muldoon told TODAY.

The thought of losing her was exceptionally devastating for Muldoon and his wife, Connie. Last August, their son James died at the age of 32 — eight days after a motorcycle accident.

“It broke my heart because Dakota meant everything to James,” Muldoon said. Their son had brought the dog home when she was only a few months old after seeing a Craigslist ad from someone who couldn’t take care of her. “Before he died, my wife, Connie, and I promised to keep and care for his dog.”

Connie received a call from a Loma Linda University Medical Center social worker, who told her about her husband’s injuries and hospitalization, but it wasn’t until she visited him that she learned Dakota was left on the mountain.

“I was devastated and angry. Since losing James, I knew I couldn’t lose Warren and Dakota, too,” she said. “I couldn’t imagine living without them and knew I had to do something.”

Connie posted to social media, and the next morning, Meg Moran saw her friend’s Facebook post and told her husband, Patrick. A regular hiker on Mount Baldy, Patrick Moran was familiar with the area’s hiking community. He spread the word among those familiar with the mountain.

Chris Simpson read about the lost dog and headed up the main trail — Ski Hut — to the top of San Antonio Canyon before working his way down.

“The snow conditions were horrendous and I sank up to my hips in some parts of the trail,” Simpson said. “It was cold and dark and I needed my headlamp to see anything, so I quit after two hours.”

On the way down, Simpson spotted hiker Ricardo Soria Jr., who had seen Dakota on the opposite side of the waterfall, but couldn’t reach her.

They tried to coax Dakota to them with some salami, but she was too frightened to move.

“Finally I lunged at her with a bear hug and lifted her off the slope,” Simpson said. They secured her with a rope to make moving her safer.

“I sat on the snow and Dakota and I slid down the trail until we reached the bottom,” the hiker said. Simpson opened the door of his truck and Dakota jumped in. “You could tell she was relieved,” he said.

Late that night, Connie Muldoon received the phone call confirming the dog’s rescue — and she broke down.

“Dakota is the last piece of my son we have,” she said. “I couldn’t stop crying.”

Later that night, a bruised but healthy Dakota finally made it back to the Muldoon home in Whittier, California.

“I kissed my dog and kept talking to her, trying to make up for what she went through,” Connie said. 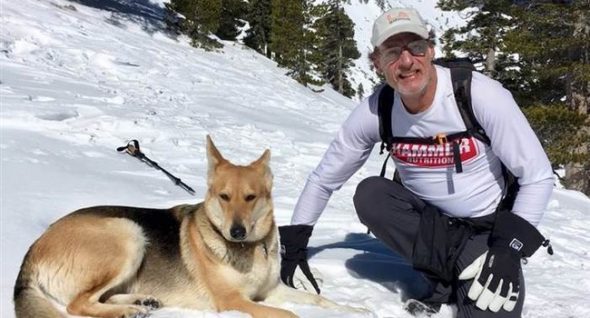 And although Dakota was happy at first, she just didn’t seem herself. Connie decided to bring her to the hospital to see her husband, which did the trick. Dakota perked up and witnesses shed tears watching the reunion, including doctors and nurses.

“If she would have died up there, it would have changed my life forever,” Warren Muldoon said. “I’d never forgive myself.”

After nine days in the hospital, Muldoon is recuperating at home. His lung and ribs are healing, and his left leg is in a cast. He uses a scooter to get around, and will begin physical therapy in a few months. But he still hopes to get back to Mount Baldy this summer with Dakota if she’s willing to go.

“I’m curious if she’ll want to come with me or not!” he said.