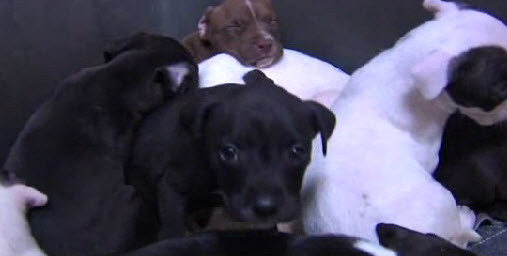 Eleven dogs were close to their death when they were found locked inside a hot car. The animals were found in Sacramento, Calif., all 11 dogs, mom, dad and nine, one-month old puppies were suffering from heat exhaustion when emergency personnel arrived at the scene.

“[The animals] were all in distress from the heat,” said Animal Care Services Manager Gina Knepp.  “It was about 100 degrees in the car when we got there.”

When a dog is locked inside a hot car, it only takes 15 minutes for the animals to reach distress levels.

“They pant harder and harder,” said Veterinarian Laura Warner. “They become dehydrated.  Their blood becomes very sluggish in their system which slows the flow to their brain.”

According to Kneep, when dogs are left unattended inside a locked car and have no access to fresh air, they can have seizures and suffer brain damage.

All animals were rescued in time and they are in good health. The owner of the animals was not criminally charged, but before he is allowed to get his dogs back, he must neuter the adult dogs.